Share All sharing options for: The Quotable Bears (Week Six) 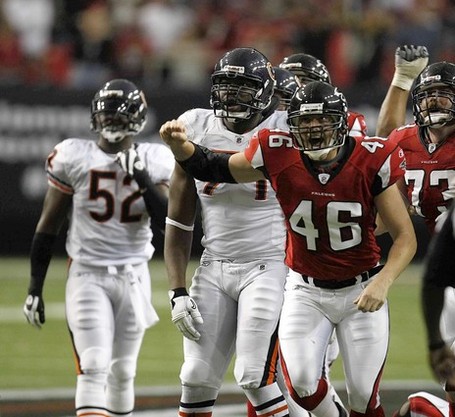 We all know what happened by now; no need to rehash bad memories. Another negative to our loss is that out of all the Tribune writers, Rick Morrissey got it closest with 21-20 Falcons. Karma’s a killer.

BTW – In the postgame interview, Lovie said that Danieal Manning has a pulled hamstring. God just wants to pile it on…

Roll call: Yours truly beat out halfblindcubbiegirl, 141 to 140. The rest of the leaders are tempchad (124), HesterSteals1st (99), torch (82), and lopey986 (69). The one positive about today is that we ended up with over 1,000 posts on the game threads. It's a new record for a non-draft day thread, so thanks to all who joined in the conversation today!

“Tough, tough. I wish I could give you more words to really show you how bad it is, but I can’t. But that’s life. You have setbacks like this, but this one hurts. We had victory right within our grasp, but we couldn’t pull it out. The kickoff before we had kicked it deep and they were able to get a long run. Guys were a little bit tired. We felt a squib would be safe. We’d get them down and they’d have a chance of maybe one more play. We keep it in play and the game should be over.”

“Matt Ryan had a heck of a day passing the football against us. We’re normally pretty good on third down, but today it just didn’t happen for us.”

Babich on the defense:

“Injuries are part of the game, and when they come up, we just have to make sure we execute as a defense and that I put them in position to be successful. Obviously, that didn't work out, so we have to get better at that. We didn't execute as a defense, and that's on me.”

“If you don’t play a full game, you can’t win on the road. We have had three tough losses, but that is just how it goes. This was a tough one on the road. You have to play extremely well and we didn’t do it the entire game. We have a game against at home coming up so we have to win. When you play teams like this who like to run the ball and eat up the clock, you have to get first downs on offense. We only had about 22 plays when we went in at halftime. It was tough to get in plays you want to run. We were able to get some first downs in the second half and get to a lot of plays we wanted to get in.”

Urlacher on the game:

“We didn’t play well enough to win. It’s very disappointing. Matt Ryan is a good quarterback. He played well. Bottom line, you’ve got to play better if you want to win.”

Tommie Harris on the game:

Hester on the game:

“It doesn’t even seem like we lost this game just because of the situation that we were put in. We came back and scored a touchdown and left them with 11 seconds on the clock. For them to come up and score in 11 seconds is bad on our part. We said that we have to start fast and finish strong and that isn’t something that we did today. We didn’t start fast but we did finish strong.”

Harris on his fumble:

Mike Brown on the game:

Lance Briggs on the game:

“The way the game worked out, we almost really kind of snuck one away. It didn’t matter that we trailed the whole game. We had an opportunity to win it and didn’t get it done. It’s sad when it comes down to six seconds in the game, but that’s football.”

“He played well against us. He took exactly what we were giving. He knew exactly where to go. He threw the ball with authority. He’s exactly where he’s supposed to be, in the league leading a team.”

“Special teams has not been so special this year” – beardown

“I’m not REALLY superstitious or anything, but I’m a little nervous halfblind isn’t here today” – lopey986

“I want to know how we can set up this many third-and-long situations and then get bent over and taken on them this often!” – cwyers

“Ryan needs to get hit a few more times. Maybe a sack? No no. That’s crazy talk.” – HesterSteals1st

“On second and 1 we run it up the middle with no fullback. Brilliant!” – tempchad

“What a dull game. When Turner’s 23 yard run (not for a score) is the only highlight the half time show comes up with.” – torch

“Not the tone I had in mind guys. Damn” – halfblindcubbiegirl