Share All sharing options for: The Quotable Bears (Week Seven) 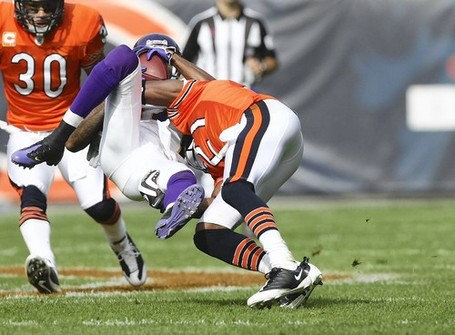 Regardless of how you feel about how the Bears played, they won a crucial game before the bye against a division rival. We won ugly, but we won nonetheless. We’re tied for #1 going into the bye and we’ll use that bye to get healthier (especially on D).

Roll Call: Our one and only halfblindcubbiegirl finished first with 103 posts. Tfrabotta (90), tempchad (73), and juperee (69) rounded out the top spots.

“It was a track meet, and luckily we had a little bit more speed at the end. Start fast and finish strong; that's what you have to do. I felt like if we could continue to get the football, we could get points on the board, and that’s what we were able to do most of the [game]. When you’re moving the ball like that offensively, you want to get it to them as much as possible, and the takeaways were big.”

“When you name a guy your starting quarterback, you’re expecting big things from him. We were and we always will expect big things from him, and he’s producing. It seems like each week he takes another step, and that’s what you’d like to see.”

Lovie on the DB’s:

“All those guys really stepped up and helped our team win. Corey Graham has played quite a bit. We’ve had a chance to see what he can do. Trumaine McBride played a lot last year. What I was concerned about was the next injury, hoping we didn’t have any, and we did. From there, you had to play players that hadn’t played. But Zack has excellent speed and good size, and he’s a smart guy. We were just hoping that he would come through if he was put in that situation.”

“We were banged up on defense,” said quarterback Kyle Orton. “We just needed to score one more than they did. We go into a game thinking we need to score 40 to win, but it usually doesn’t happy that way. There were a lot of guys making plays; a lot of ups and downs. The guys really banded together and made some plays when we had to. It was a great game. It was a critical game at a critical point in the season heading into the bye.”

Booker on his performance:

“He [Orton] came up to me and said he was going to come back to me and give me more opportunities. It was just a matter of me being mentally tough and putting everything out of my head. I didn't think it would be like that. I had no idea what coverage they were in. Everything just parted open, and I was like, 'I have to take advantage of that.' I was tired [after the TD run], and I can't just go back to back like that after running 51 yards. So I had to get some oxygen, and I didn't know if I'd be able to finish the game.”

Desmond Clark on the game:

“Mike Brown came into the locker room after the game, and the first thing he said was, 'All we needed was 48.' “

Greg Olsen on the game:

“It was definitely wild, but finally we were able to pull one of these games out, and we desperately needed to. To go into our [bye week] over .500 and now be 2-0 in our division is huge.”

Rashied Davis on his TD:

“I just happened to hustle downfield because my guy was chasing []. I wanted to get my guy with a block, but I didn’t want to block in the back. I was just hoping that Dez would outrun him. He sort of did, but he lost the ball on the goal line.”

“It was a shootout. I thought I was back in the Arena League.”

Mike Brown on the Vikings:

“They pretty much did whatever they wanted to on offense. They moved the ball up and down the field, scored on it seemed like every possession except the ones we got turnovers on. But the bottom line was we had more points at the end and we found a way to make a play this time on the last drive.”

Mike Brown on the defense’s performance:

“It's not the injuries at all—we're just not playing well as a defense. I wish I knew what the answer was. It's very disappointing because we have a lot of confidence ... but can't put our fingers on it.”

“This is the best team we've had in the years I've been here, as far as offense, special teams and defense. We're a solid team. Once our defensive side of the ball contributes to us getting wins, we're going to be a very tough team to beat.”

“It’s kind of becoming difficult getting these games at the last minute, but we finished. We played with what we had and the new guys stepped up and made big plays for us. If this team can win like that, I just can’t wait to see how we look when everybody comes back.”

Alex Brown on the game:

“The defense played horrible. Our offense is rolling now. If we can fix the defense, we can be a great team.”

Zachary Bowman on his performance:

“The only thing I remember is Coach Wilks telling me, 'Get the jam and get deep. The easy ones are the hardest ones to catch and I just had to catch it. Just seeing the things that went on last week, I knew to defend deep to short. We were in kind of the same situation again and I just learned from it. A good story with a happy ending, I guess.”

“They are who we thought they were” – mike b

“Wow….threaded the needle. Orton looks like a professional QB” – tempchad

“That was too easy for both teams” – WCG

“Actually with Hillenmeyer hurt, we may be better now” – tempchad

“Was that Muhammad out there?” – Chanman25

“Yay Sheed! Way to be johnny on the spot, buddy!” – halfblindcubbiegirl

“Bear Down Chicago Bears, you sing the rest!” – Chanman25