*** First, have a good one, especially if you have kids. 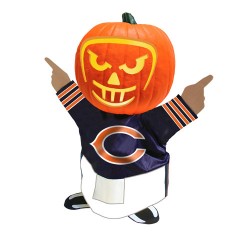 *** Devin Hester is anxious to get the return game going.

''I've put all the pressure on myself and say that it is my fault that the return game is not the way it was,'' Hester said. ''At the end of the day, I'm the one with the ball in my hands, and I've got to be the one to figure it out and pick up the slack. If something breaks down, that's why they rely on me to spark the return game.

''I've got to be the one to step up and make big plays. It hasn't been the way it's been, so I take some of the blame for it.''

Orton is on pace to pass for 3,814 yards, which would be only 24 shy of Erik Kramer's 1995 franchise record. Olsen projects as the leading receiver with 677 yards. Typically when a team's top receiver has that low of production, it means the quarterback has been climbing out of the clown car on Sundays. You've seen the drill.

Orton said he can't even identify a favorite target. He's a fan of the open receiver.

*** It might be surprising to hear, but Brian Urlacher misses Roy Williams.

"He got us fired up every week, I'll tell you that much," Urlacher told the Detroit media via conference call. "He was fun because he always was running his mouth. But I'm sure he's not too mad to be where he's at right now."