Share All sharing options for: The Quotable Bears (Week Five) 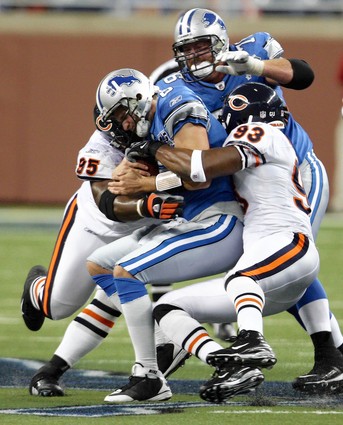 It was a real rough weekend for all of the Lions, not just Orlovsky. Kyle Orton threw for over 300 yards. The fact that a Bears QB did that makes me feel as though I'm rooting for the wrong team or something bad happened, because this doesn't seem like the Bears I know and love.

Roll call: halfblindcubbiegirl dominated everyone on the game threads with 119 posts. Yours truly came in second with 57, followed by beardown (45), mike b (38), tempchad (31), and torch (24) rounding out the top spots.

Anyways, onto the usuals.

"From the first drive, shutting them down and making them punt, really kind of got it started for the day. The defensive line put pressure on the quarterbacks all day. We were able to shut down their run and just make plays. It's the best we've played as a team. This is the best we've played as a team. We talk about starting fast and finishing strong. This week some things came together for us. I think we had control most of the game. I thought we had the momentum from start to finish. Today we just really talked about what we did as much as anything and the effort that we had. There's a lot of football left to go. But that's our goal: getting on top of the division and staying there."

"He has gloves for hands."

Orton on whether he enjoys playing the Lions:

"I saw the flag go down and we got the pass interference. Then he said, 'I caught it.' I was like, 'I don't know about that.' I looked up and saw the replay and it was an unbelievable catch."

Forte on his lunge for a TD:

"Oh, yeah, I was in. You can look at the replay. I jumped, and my knee wasn't down when the point of the ball crossed. It was a good effort by myself. I just thank God for the opportunity."

"He probably had one of his best games ever, with the way he managed the offense and kept us in rhythm the whole game. He was on point, whether it was deep throws or throws in coverage he had to squeeze in there."

Hester on the WR's performance:

"We're a running team, but any time we could be called upon [we're] ready. If they call a receiver's name, you go out to get the job done. I feel like an athlete."

Rashied Davis on the game:

Mike Brown on being on top of the NFC North:

"If we stay there, we get to the playoffs. If we don't, it's going to be a battle. Our goal is to stay there."

Tillman on the defense:

"You see what happens when we play great, but I still think there's room for improvement. The sky's the limit, and we haven't reached that sky yet."

Tillman on his INT:

"It was just a bad throw, [Williams] tipped it, I caught it and I went into the end zone. It was pretty simple."

Dvoracek on the defense:

"We've started [strong] in a lot of games, but the thing that was so good about today was we played well for all four quarters. Everybody did their job all day and we played well."

Alex Brown on the absence of Tommie Harris:

"I wouldn't go that far. You don't find a guy with Tommie's ability every day. You can't just walk down the street and get it. We have guys that are capable of handling the job. To not have Tommie, that's big. We'd love to have him. ... When [other guys] get their numbers called, you're supposed to step up."

Roy Williams on the game:

"Games you're ‘supposed' to win scare the s*** outta me" - halfblindcubbiegirl

"Good Lord it is silent in there" - torch

"This Forte kid is kind of good at football" - thecubreporter

"When did Hester learn to play WR?" - big_lowitzki

"I thought this team came off the bus running?" - beardown

"Still a lot of time left. My faith isn't quite up to calling anything a win yet" - halfblindcubbiegirl

"Orton drives a Prius and recycles. F*** him" - tempchad (Quote of the Week)

"How to tell it's a blowout: puns about RB's last name and recycling stories" - halfblindcubbiegirl

"Hahaha. That was a great assist on the tackle" - Scott Sox