Share All sharing options for: The Quotable Bears (Week Fifteen) 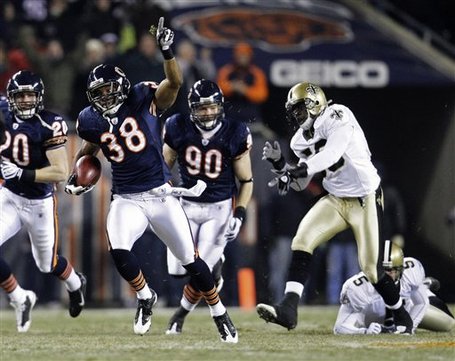 First things first….Thanks to #23 for putting up the 2nd half game thread. Roll Call: halfblindcubbiegirl took it down with 171; bs.uf15bosox9bears23 had 142, and aznsensation wound up in third with 126.

Second, the Bears won. Sounds like we won ugly, but we won. The fake punt deal is both good and bad. I’m glad that Lovie decided to think outside the box, but I’m not sure the timing was good.

Third, Danieal Manning deserves to be returning punts and kicks for the rest of the year. End of story.

Fourth, sounds like Orton was iffy tonight. I can’t and won’t comment fully because I didn’t see the game.

Fifth, Devin Hester at WR sounds like he’ll be a good slot WR. Looking forward to seeing him once we get a true #1.

Finally, a personal rant is about to commence. This statement does not reflect the opinion of Windy City Gridiron nor its constituents:

Williams wall = Absolutely amazing. There is no such thing as responsibility in this country anymore. We see Martha Stewart go to jail because of insider trading that netted her $60,000. As I remember it (and I may be wrong, please correct me if I am), the Williams boys have a $400,000 weight loss clause in their contract. Did they really need the money that badly? I’m sorry, if you’re a professional athlete, EAT HEALTHIER. Why take a diuretic? If you legitimately need said supplement to live, it’s understandable. I doubt that’s the case. The whole thing is ridiculous.

Before you start attacking me, yes, I’d be just as pissed off if one of our Bears took a banned supplement, regardless of whether or not they knew. Ignorance of the law IS NOT AN EXCUSE. One does not need to be an attorney to know that.

Let’s get on with it before I alienate myself from everyone.

“Offensively, we stalled there for a while. But at the end we needed to put together a couple drives, and our offense answered the call.”

Lovie on Devin being a WR:

“As a receiver, [Hester’s] gotten better and better. He’s still hard to cover when he’s in a one-on-one situation. We’ve had him open a few times and haven’t been able to get him the ball. But in the end he came through as an offensive weapon and put us in position to win.”

“He’s been showing signs of being able to break one all the way for a while. We want him to celebrate when he gets in the end zone, but we’ll work with that.”

“It just feels great. I thought we might have let one slip away and then to come back and get a big win in overtime ... We've been in the playoffs now for us basically the last two weeks and are 2-0, so it's win or go home basically. We lived to fight another day.”

Orton on the D:

“This is the best game they played all year. They really just played outstanding. [They] put pressure on the quarterback and got some turnovers for us.”

Hester on the PI call:

“It was a stutter-and-go. I froze the safety, and he bit on it. Then I just ran right past him. I was hoping [a penalty] was going to happen.”

Danieal Manning on his return TD:

“There was great blocking and I just ran. I don’t think I was touched. Honestly, I wasn’t expecting that. I was expecting good field position, but not a touchdown. I really wasn’t. But I’m happy about it and I’m going to keep improving.”

Briggs on the playoff picture:

“Huge. Absolutely huge. We can't lose. I never thought things looked bleak for us. Why? Because I believe.”

Wale on the D’s performance:

“I’m really happy with the way we showed up on defense. Things looked bleak at times, but we showed up and we played magnificent. We got some turnovers when we needed. We were getting pressure. We were stopping the run. Guys were running to the ball and I’m excited the way we came out and played. It was a game where everybody knew what we had coming in. They knew the caliber of the quarterback we had coming in and I think people were looking to see if we were for real or we were not, and I think we were looking for the same thing because we haven’t had this consistency where we were able to show up two weeks in a row.”

Wale on the William’s ruling:

“I think it's funny that a judge gets to rule on that. I think he has a conflict of interest in that ruling. But we can only control what we can control. And we took care of business. Like I said during the week, we'll be fans of whoever's playing the next couple of weeks.”

Robbie Gould on the game:

“It's a great opportunity to get a field goal to win the game, but at the same time it's a total team effort. The offense battled back. And the coin toss went our way. The offense played well just to get the ball down in range.”