Share All sharing options for: The Quotable Bears (Week Sixteen) 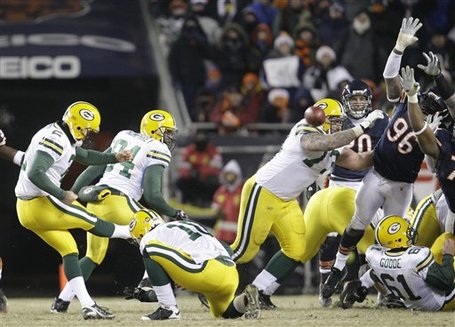 Second, I’m surprised by some of the comments today. It seems as though we’ve split into two well-defined groups: One is just excited our playoff hopes are still alive and one is absolutely furious how we won last night.

Personally, I fall in the first group. That doesn’t mean that all I see is sunshine; I saw the same inept offense everyone else did. I saw how individual players were making horrible decisions (e.g. Kyle Orton on his INT; AP during the KO return). I saw a game that we had no business winning.

But wasn’t that part of the mystique of winning that game?

It was unbearably cold, windy, playing our longtime archrival in primetime with our playoff hopes on the line. Our offense sputtered, our defense was pretty good, and our special teams was terrific. We played Chicago Bears football in a Chicago Bears setting. In my book, it was one of the best endings I’ve seen.

That doesn’t mean I’m blinded by the victory. Our OL showed they couldn’t push through a wet paper bag through most of the game. Our DL got upfield but couldn’t sustain any real pressure on Rodgers. Our WR’s dropped balls….again. Orton was less than spectacular. Our secondary played well for the most part, but they had their moments.

At the beginning of the season, I would have been ecstatic if someone told me we had the possibility of being 10-6. Our defense hasn’t played up to their contracts. Our OL is a thrown-together mess; same with our WR’s. We shouldn’t be in this situation. But we are. Even if we don’t go far into the playoffs (or even out of the first round), I still want them to go. We gave a lot of games away this year, but this group deserves to go.

Regardless, a win is a win. Yeah, we didn’t play as though we deserved to win throughout the first three quarters, but we closed out the game as the victor. In the standings, there isn’t an asterisk behind the score. Just because we didn’t "deserve to win" doesn’t make it any less meaningful. We beat the Packers at home.

“I’m really proud of the job our football team did. At halftime, there’s not a whole lot for us to say really. I understand why we were getting booed. We hadn’t really showed up at all. But you have to play two halves. The second half the team really came through. Offensively, we didn’t get a lot done in the game until we had to. It seems like two weeks in a row, the last couple drives when we had to come through and get points on the board we were able to do that. Our season was on the line. There was a timeout, so we had a little time to really [talk to] the guys one more time and say, ‘We have to block this kick,’ and Alex Brown came through like he’s come through many times in the five years I’ve been here. That’s what the team needed. I don’t know if I’ve ever been prouder of a team for how they hung in there and found a way to win the football game at the end. We still have ourselves in position. I know we need a little bit of help. But now it’s down to one game. All we can do is get another win and see what happens.””

Lovie on the first half:

“I can’t really tell you why we played the way we did in the first half. I thought we had an excellent week of practice, and it’s the Packers. But for some reason, we didn’t come out and play the way we ended up playing at the end of the football game. A lot of times when your backs are really up against the wall, the best in you comes out and that’s what happened to us. Normally, it’s how you finish, and I’m pleased to say the least with how we finished the game.”

“It was just a crazy, hard-fought game. Everything was on the line for us obviously. We didn’t play our best football, but we sure dug down deep and did it when it counted.”

“Unbelievable. You want to make the offensive linemen think you're going to go here, and try to make a move and it kind of opened up right there. You get a hand up and hope the kicker kicks the ball to your hands.I came through pretty good. You never think that it’s going to happen. You just go as hard as you can and see if you can get a hand up and hopefully you get it.”

“Please, please Eli [Manning], play four quarters. Please, beat . You're going to get a week off [for a bye], so just play the whole game.”

Urlacher on the game:

“Amazing. We were resilient. We played terrible the first half. Came out in the second half and made some plays when we had to. The offense put some points on the board at the end. We block a kick. Wow. I'm so excited for our team.”

Urlacher on the coin toss:

“I looked at the ground the whole time. I didn't even see it coming. Shoot, I need to get that guy to throw it at my head every time.”