Share All sharing options for: The Quotable Bears (Week Seventeen) 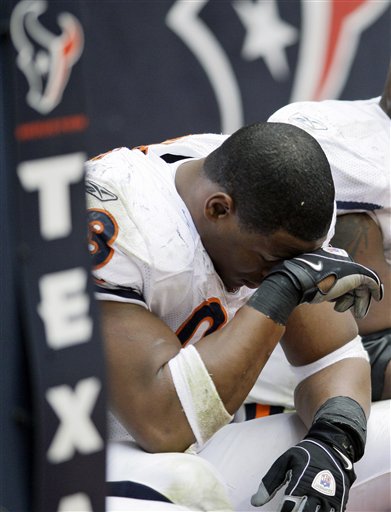 Thanks to all who participated on the game threads.

Before I start my weekly rant, I would like to thank everyone for this past season. It has truly been fun hanging out on the game threads and discussing everything Bears with you. I realize that I may have alienated or angered some of you throughout the course of the season (shout out to you, big), and part of that was by design to keep discussion going.

Although it may not have seemed like it, I never took anything personally and I hope none of you did, either. Through all the arguments, all the debates, we’re all diehard Bears fans. Some of us disagree (vehemently) with one another on the future direction of our team, but that’s ok. It’s bound to happen on a blog of this nature. My only hope is that you all enjoyed the ride as much as I did.

Onto the season after the jump.

“Be not deceived; God is not mocked: for whatsoever a man soweth, that shall he also reap” – Galatians 6:7 (KJV)

It doesn’t seem like too long ago that we were all upset about the , , and games, and we had a right to be. The Bears’ MO throughout the entire season was start fast, finish slow. We had three games we flat-out should have won. But we didn’t.

In this sense, the Bears reaped what they sowed.

Jerry and Lovie believed that the offensive line was feasible. A drunk monkey could see that it wasn’t.

Jerry and Lovie believed that Hester was a true #1 receiver. A solid #3, maybe #2, but definitely not #1.

Lovie believed (in training camp) that our defense was fine, and 2007’s subpar performance was due to injuries. Way to hold your guys accountable, Lovie. It’s always someone else’s fault, right?

Speaking of salaries, let’s look at some of the salaries that you will make you want to bang your head against the wall:

Rex Grossman - $4.5 million (who played in four games; technically, one was the Lions as a scrub role)

By the way, our 2008 payroll ($120,715,139) ranked 9th in the NFL. Think about that for a second. We ended up 9-7 as a team. Our offense is currently ranked 26th and our defense is 14th. How our defense is 14th in the NFL is beyond me, but we played terrible throughout the season. For having the 9th-highest payroll in the NFL, we’re definitely not getting our money’s worth.

After this season, it’s easy to point out those who are drains on our payroll and our team in general. Hunter Hillenmeyer showed he can’t defend a pass, which is a necessity as a Sam backer in the Cover 2. Nathan Vasher can’t tackle. Marty Booker was unspectacular and he’s getting old. I don’t really care what Lovie and Jerry decide to do about Rex, but if they do bring him back, it sure as hell better be for less than $4.5 million.

The reason why I point this out is due to the numerous holes we have on our team. As I sit here writing, I can count QB, backup RB (no, AP is not the answer), WR, OL, NT, SLB, CB, S. Unfortunately, Lovie and Jerry have also established quiet offseasons at Halas Hall. Remember when we signed Moose? It was considered a big acquisition. That’s a problem with a team that has so many holes as we do.

I am not clueless enough to know that many Bears fans are calling for Lovie’s head. I wholeheartedly agree that Bob Babich needs to get a pink slip. I feel mixed on Turner, mostly because he had his moments of brilliance (to be fair, this is the same coach that kept running the FB dive). Lovie does not deserve a pink slip for a 9-7 season. If we play inconsistent football next year and don’t make the playoffs, I’ll be at the front of the line calling for his firing, but not now. Think about it this way: If Babich is truly Lovie’s personal gremlin on defense and gets fired, Lovie is left as the person to answer the tough questions. If Babich goes and our defense is still horrible, Lovie’s on the chopping block. At the very least, by firing Babich, you can get rid of the “good ‘ol boys” country-club atmosphere with the defense.

I realize that I’m ranting, but at the same time, expectations in and out of the Bears camp were for a 6-win season. We ended up with 9 wins, so that’s obviously a step in the right direction. There were numerous happy moments throughout the season that I can think of and some players established themselves (Danieal Manning on kickoff returns, Matt Forte).

I’m happy that our team did so well compared to expectations, but now I want to see management bolster our roster and get rid of waste. Hopefully Jerry and Lovie will make some drastic changes over the offseason. At this point, I just want to see some action. Here's hoping, anyways.

Lovie Smith on the game, season, and offseason:

“You start off with the lead and you have to be able to maintain it. They played well, especially their quarterback getting the ball to a lot of different receivers. Offensively, the first drive was good but lull in middle of game where we weren't as productive as we need to. Turnovers hurt you. Disappointing. We knew what was at stake. The guys practiced well and prepared well but today they played better than we did.

“Disappointing season but when you finish 9-7 you're close. We'll evaluate where we are and go from there. I think you have to judge what happened. We did make progress from last year, we were a better football team, but we weren't good enough to get in the playoffs. Our goal was to win the world championship but to do that you have to get in the playoffs and we didn't do that. Our team failed today. Overall our team didn't play well enough this year to accomplish our goals. We're not going to separate anyone.”

“All the players will have competition. But Kyle Orton is our quarterback. He has done a lot of good things for us this year, but we'll go from scratch. We'll start evaluations right away. When you're 9-7 you're close. You don't need an overhaul, just a few pieces to the puzzle and that's what we'll do.”

Lovie on Danieal Manning’s future with the team:

“Do I know right now what Danieal's position will be next year? No, I don't know. We have a little bit of time to figure that out.”

Ron Turner on Orton’s ankle being a factor the last seven games:

“The quarterback made some very good throws. [Tillman] was in good position, and unfortunately he didn't come away with it.” [ChiFan’s note: Wait….we have one more comment from BGB!]

Big Game Bob on his future with the Bears:

“You'll have to talk to the coach about that. Anytime you lose a game of this importance … it means something. Once again, as players and coaches, we take this one hard. It's a big game, we didn't play well and that's the bottom line. For them to take it down and score was a blow to us. At that time they were passing the ball very well. We were stopping the run pretty good at that time. I'm a guy who takes responsibility for things that go wrong. It's very disappointing.” [ChiFan’s note: We have to go talk to Lovie about your job status? I’d rather you just quit instead of waste 30 minutes of my life listening to LovieSpeak]

Orton on the game and season:

“It was a tough loss. We put a lot of effort in the season, everybody did, this team has a lot of character and worked extremely hard but came up short. That's football, I guess. It seems we've done a good job of starting fast and finishing. We just have to find ways to make it last throughout the entire game. We go through a second and third quarter lapse where we don't do a lot. We have to get that corrected. I'm a young player and feel I can keep improving. The more experience I get and the more game time I get I'll get better from there.

“Obviously not everybody going to be together again. We have a lot of comraderie. Just great teammates and for it to be the last game with those guys is tough, so it will be a new team next year but I'm looking forward to working hard in the offseason and improving. I think we have a great group of guys. Tried hard but we just have to play better and we'll see who's here next year. From the start of the season we always put ourselves in position, didn't close out a couple of games that came back to hurt us, but for most part played pretty good football and gave ourselves a chance. Not too many people were giving us a chance to start the season, so all in all thought we played pretty well.”

Orton on acknowledging his ankle has been bothering him:

“It was a battle every game, a battle throughout the week to get it feeling halfway decent. Something would always happen in the game to re-tweak it. I don't think it affected my game a whole lot.”

Forte on his injured toe:

“I got it stepped on and sprained it a little more. It was hurting a little bit, but I've got to play with that. I was out there trying my hardest. I'm going back on the field at all costs.”

Desmond Clark on the season:

Manning on the blown coverage that led to a Johnson TD:

“That was all me. It didn't have anything to do with Peanut. I thought it was going to be a run play. The quarterback did a good job with the play-action [fake]. I ran up to support the run, and then he threw it over my head. It was just busted coverage on me. He [Lovie] just told me to stay deep, 'We don't really need you on the run support in Cover-2. That's just me trying to play outside the defense. I should have been more patient than I was. I thought I read run and it wasn't. Good play call on them; bad play on me. I had family here, about 24 people. That was good, seeing them all. But not like this.”

Tillman on the game:

Alex Brown on the season:

Quotables from the WCG Game Threads:

“This is the pros, right? How the hell does their #1 receiver get lost in coverage?” – LerxstCub

“The secondary has killed me all season long. Man alive!” – The Original Dave

“Ok, that report pisses me off. Why are the players bothering to find out about the Vikes? Focus on this game, dammit” – chibullsfan03 (Quote of the Week)

“We may be out of miracles today” – LerxstCub