Share All sharing options for: The Quotable Bears (Week Fourteen) 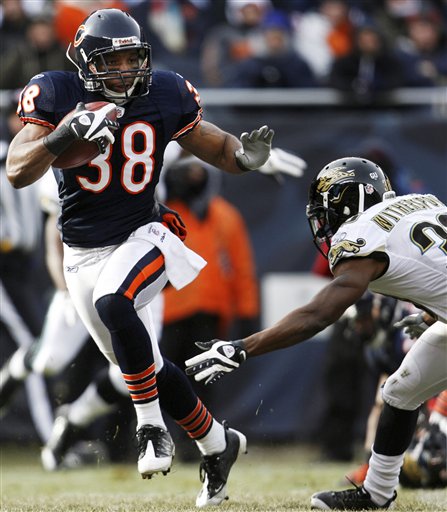 Complacency (n): a feeling of quiet pleasure or security, often while unaware of some potential danger, defect, or the like; self-satisfaction or smug satisfaction with an existing situation, condition, etc.

That is what I saw from my Bears after halftime. They were complacent during the second half of the Rams game, partially because the Rams couldn’t score on a Pop Warner team if they wanted to, but this was different. I saw a team that came out with fire, determined to erase most of the bad memories from the Vikings game. The defense and offense was fired up and executed (mostly) with ease. Early on, it was apparent that we would overpower the Jaguars if we played with the same intensity throughout the game.

The problem was the team sensed it and started believing it. We were flat throughout the second half. In college football, big-time programs can go against lesser opponents, put up a ton of points in the first half, and just coast through the second half. We’re the Bears; we can’t do that, especially with a NFC North title on the line. This is the mantra of the 2008 Bears: If we’re up at half, we don’t need to be creative and keep executing.

For the most part, Orton made good decisions. His interception was terrible, but he also gunned one to Olsen for a TD in traffic.

Hester had a decent return on one punt, but it’s obvious he’s starting to lose confidence. When he’s struggling to even catch the ball, we have a problem.

Forte did a good job (again) this game, but I’m starting to grow tired of our OL not creating holes for him. BTW – this isn’t a gripe specific to this game, it’s been this entire season. If Forte had a good OL in front of him, he would have won Rookie of the Year. No doubt in my mind. The dude can just flat out run, on top of blocking and catching the ball.

Let’s get on with it.

“We started today needing to get a win in the worst way. We talk a lot about starting fast [and] our team did that. The interception by Danieal Manning was big.”

“We have a lot of confidence in Kyle. He’s done everything we’ve asked him to do. No quarterback is perfect. In each game there will be a couple plays Kyle would like and all quarterbacks would like to have back. But we like his leadership at the quarterback position and what he can do to help our football team win.”

Lovie on Tommie Harris sitting in the 2nd half:

“Tommie was a little banged up, nothing major. We just decided to sit him out a little bit. [He was] a little sore.” [ChiFan’s note: He was sore? Poor baby. For his lackluster play all year, he needs to be out there and actually earning his paycheck. Novel concept, I know.]

“It seems like we’ve talked about him the same way every game. Since the [opener], you know what to expect from him. He’s a good runner. He can do all of the things you ask a great running back to do. There’s no rookie wall. [He has] all those things you look for. He was excited about playing today [despite the bitterly cold conditions]. This is a guy that’s been down south most of his life. [He played with] no sleeves. [He’s] just a tough guy. The Chicago Bears want a tailback like that for sure.”

Babich on the game:

“Any time you give up 10 points, you put your team in position to win, so we feel good about that. The last drive they scored on was a disappointing drive—some things that went on—but, hey, we’ll take the victory and we’ll run with it.” [ChiFan’s note: Thanks to Bob Babich for driving my complacency point home]

“I didn’t see the numbers, but I know Brad really had a good game, and our coverage was really good. He gave us field position all day.”

“You always have your game script. You prepare for your first 20 plays and certainly don’t prepare like you’re going to get the ball at the 5-yard line. So to be able to go out and get a big turnover and get seven on them right away was huge. We came out and played really well in the first half. We established the run—which when you get into December at Soldier Field you’ve got to do—and we made enough plays in the passing game. We started fast and we did what we had to do to get the win. It was cold, [with] a little bit of wind. But all in all if you can give me that weather for the next two games at Soldier Field, I'll take it. It was not too bad.”

“That's a blessing and a great accomplishment. I'm glad I had the opportunity to do it. I never looked at anybody's stats. I just go out and play every weekend. I really worry about the win column.”

Forte on the frigid conditions:

“I never wear sleeves, even though we play in cold games. It's most important to keep your chest warm instead of your arms. My arms don't get that cold.”

Olsen on the TE’s:

“Me and Dez definitely have that feeling that the offense can lean on us. When we need plays, they can come to either of us and we’ll be there for Kyle [Orton] to make the plays. The last couple weeks we’ve been kind of quiet. We didn’t have a ton of catches [Sunday], but they were important catches to get touchdowns and first downs. It’s not quantity; it’s the type of catches you have.”

Olsen on his TD:

“It was a great play. Prior to that we had run a few corner routes, and the safeties were playing pretty wide. Coach [Ron Turner] made a good call. We just felt we could go right down the middle on them. Kyle made a great throw and we were able to score real quick before halftime.”

“I was fired up for him. I ran over to him and the first thing he said was, ‘Don’t forget to be on the extra point.’ I [replied], ‘Man, you can’t even let me celebrate with you?’ I was happy for Dez. That’s his first one of the season. He’s a heck of a player and I’m happy to see him get in the end zone.”

“I was just happy to be back out there. Sitting out the past two weeks has been killing me, sitting there watching my teammates out there playing and fighting and trying to win and stuff and you can’t be out there to help. Just to come out today and get a few balls and help this team out, it felt good to get back out there.”

Danieal Manning on his INT:

“We were in a zone disguising it as a man-look. He literally threw it right to me. I hovered over my guy, peeked outside, saw the guy running a little dig route and Corey [Graham] was covering, so I kind of ran underneath and he threw it right to me. It’s good. We live to fight another day and we’re closer to the playoffs. It comes down to the last three games.”

Wale on the game:

“We were just able to make plays. We got that interception early and we were getting off the field on third down. Last week, the momentum changed after we let up that big score. The wind was out of our sails. This week we stayed consistent. We stayed on top of them because we know we don’t have any room for error. There’s none, so we have to play like this for the next three games.”