Share All sharing options for: The Quotable Bears (Week Four) 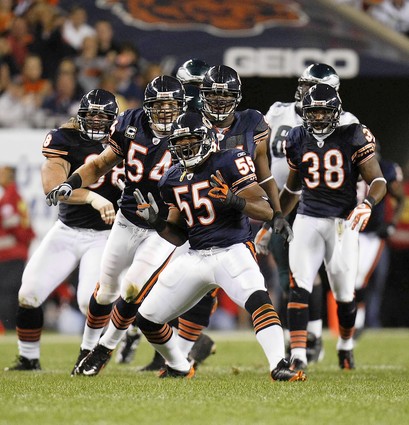 I felt like throwing this picture up here, mostly because Briggs was flying around like a possessed man last night.

Anyways, now onto the good stuff:

"Defensively, I really felt the guys stepped up. After we turned the ball over a few times, the defense met the challenge each time."

"Tonight was huge for him. We had some opportunities to make some plays and he made them. We just went with what we felt gave us the best chance."

Orton on the offense:

"I thought we played extremely well in the first half. We made plays, executed and had them back on their heels. But then in the third quarter we just went out and laid an egg. We had to have this win and now we're in good shape. We've played good football for the most part in all four games. The defense did a great job of finishing this game for us and now hopefully we'll get on a roll."

Orton on the no-huddle:

"Usually when you go with the no-huddle it's tougher for the coordinator to get in their personnel that they want. It's a good plan. Plus, you can get up to the line of scrimmage and really have a lot of time to see what's happening and try to get to the right play. It was a good idea by coach [Ron] Turner to come out in a no-huddle and see if we could get them into some base looks, and that's what happened. It was a good game-plan."

Hester on being back:

"I'm just glad to be back. That's the most important thing. Last week sitting on the sideline and seeing my teammates, knowing I could have been out there helping out, it was a hurt feeling. I'm just blessed to be back and thank God. I felt great. The adrenaline kept the pain away and motivated me to go out and play ball. I just went out and put in my mind that if I'm out here, I'm not hurt, otherwise I wouldn't be out here. That's the mentality I went in with."

Hester on the pass that hit him in his hands:

"I most definitely would have scored on that one. I kind of took my eye off the ball before it went in my hands."

Forte on the offense:

"It's a team effort. We needed our defense to step up and they did, and I needed to get that first down on third down and it was a big run."

Forte on his performance:

"It's tough running out there when they are keying on the run. But I just kept plugging away. You know, you can't give up. That's why the passing game opened up a lot. We can't run the ball every pop; we have to be effective in the passing game."

Urlacher on the D (winner of The Greatest Understatement award):

"We're supposed to close out games when we get a lead. Tonight we took care of business when we had to."

Briggs on the team:

Alex Brown on the goal-line stand:

"What was going through my mind? Everything that was going through everybody else's mind-make a play. You've got to make plays within a scheme of the defense. I was fortunate to have my name called on that one, fortunate to make a play. But we had some guys that came up and hit him from out of the end zone. So it wasn't just me, it was the whole defense. We made a play."

Vasher on the goal-line stand:

"This goes to show how close we can be to being a dominating team. We need to continue to be consistent and finish."

Dvoracek on the goal-line stand:

"The whole time we were thinking that we were going to make the stop and win the game. You can't think, ‘Here we go again.' You have a positive mindset. You've got to know there's no way they're getting in that damn end zone, and they didn't."

Mike Brown on the goal-line stand:

"That was huge for us, especially the way that we finished off games the last couple weeks. I think that goal-line stand's going to be a big boost for us throughout the rest of the season. It was the fourth quarter again, and down to the nitty gritty. We needed that."

"Should the Bears come out and take care of business tonight, it will be a fantastic week what with the Pack, Vikes and likely the Cowboys going down" - WCG

"What team is this?" - Arbusto

"Wait a minute, Michaels. Injury to insult? Not the correct statement" - ChiFan13
"Cracking on Michaels is not a legit comment....too easy" - Ditka vs. God

"Forte should teach the linebackers how to tackle" - halfblindcubbiegirl