The Good, The Bad and The Ugly - Eagles VS. Bears

Share All sharing options for: The Good, The Bad and The Ugly - Eagles VS. Bears

It would be easy to start and stop this post with the defenses goal line stand, but we have already put that one up on the pedestal, so lets look elsewhere. 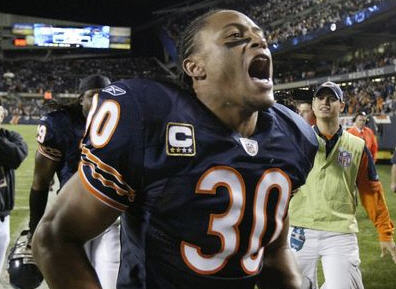 It seemed only days ago that ChiFan and I staged an impromptu backstage fight complete with lame witicisms and comebacks about needing Mike Brown to be more involved and do some work closer to the line of scrimmage.  We like to joke around here that the Bears read the blog, but doesn't it seem like things just happen after we talk about them?   Regardless, Mike Brown was more involved this game and was moving around a lot more.  He was around the ball more and in Philly's backfield a few times.  This defense is better when Brown is more than just a deep safety.

Matt Forte.  It is good to see that the Bears realize and are willing to use his ability as a receiver.  Forte led the team in receptions this week.  A short pass often achieves the same as a run and if the run defense is not letting your get going our of the backfield, go around them.

Kyle Orton.  I know his second half was as bad as his first half was good and I know that if he could connect on some of these long passes there would be no need for overtime games and goal line stands, but the team has bought into him.  He is showing more and more week by week.  They are letting him go down field more than normal.  They are letting him change up plays base on what he sees.  He finished with 3 TDs.

How about a little love for Brad Maynard who bombed a 58 yard punt and a 67 yard punt?

Ron Turner.  Yea, I said it.  Despite all his issues with not being creative and predictable, his decision to run the no huddle to start the game might have been the biggest thing the Bears did.  The Bears were able to with the no huddle and some creative play calling get an early jump that the Eagles were never catch up with.

You  hate to have to talk about this type of think, but it was out there.  This week in football there was more than a share of tragedies and scary moments.  Firstly and I am sure you all have heard Tampa Bay kicker Matt Bryant buried his 3 month old son days prior to the game.  I am sure this news hit some hard for  Tillman.  Jacksonville player Richard Collier who was shot numerous times is paralyzed and had to have a leg amputated.  On the field there were a couple of nasy moments.  During the Jets/Cardinals match up Anquan Boldin took a wicked 1-2 hit to the head and was knocked out as he went to the ground.  He is better and there was no permanent damage.  Lastly, Denver receiver Clifford Russell went down with a sprained neck after going head first into a group of KC blockers on during a kick off.  Both Russell and Boldin were taken off the field in strechers.  Russell is also alright and has been released from the hospital.

Bears pass rush.  The Bears did knotch 3 sacks, but could never get constant pressure on Donovan McNabb.  There were times McNabb was back there so long it looked like he was getting nervous knowing that after 6 seconds he should be getting sacked, but instead was able to stay up straight.  The Bears cannot use safety and corner blitzes every down.  They have to figure out how to get pressure with their front four.

Bears receivers.  With Lloyd possibly out and not counting the tight ends one or some of these guys need to step up.  On multiple occasions Orton had to scramble and was looking down field and had to either throw it away or run out, because nobody could get open.  These guys have to start helping this offense out, because it is trying to be good.  We have a run game and we have a QB who granted has some flaws, but is trying to win us some games.

I know we have talked about this and I know he is a huge name in football, but does anybody actually want to hear John Madden talk anymore?  Yes, Al Michaels is a cocky and smug SOB, but at least he speaks some version of  English.  Madden was just eating up his words.

Kyle Orton and Kevin Jones.  I don't know if we will ever know whether this was supposed to be a fake handoff or not, but these two guys combined for the ugliest moment of the game.  Orton attempted to hand off the ball to Jones, who was either not expecting it or didn't realize he had lost it and the ball came loose.