In youth football (pre high school) it's common to see the players trying to emulate their favorite players like Brian Urlacher and Lance Briggs, or Matt Forte and Jay Cutler.  As a coach you try and have the kids pick out a player to watch to learn from, whether it's on Sunday, Saturday, or even Friday nights.  You tell the linemen to focus in on the trenches and watch their technique to see how they use leverage and positioning to get the block made.  You have your signal caller watch how the quarterback carries out every fake every time and time again.  How the running backs run with patience to allow the blocks to set up.  How the defensive ends are cognizant of containing on every signal play ran away from them.

A couple weeks ago many of the NFL players started to wear pink in an effort to raise awareness for Breast Cancer.  The NFL is on a month long mission with their campaign "A Crucial Catch: Annual Screening Saves Lives", with a goal to have women over 40 to have annual mammograms.  Bears tight end Greg Olsen has been in the spotlight this month as breast cancer is a very important and personal cause for him.  His mother Sue is a breast cancer survivor, and Olsen has his own foundation, Receptions For Research to aide in the fight against breast cancer. 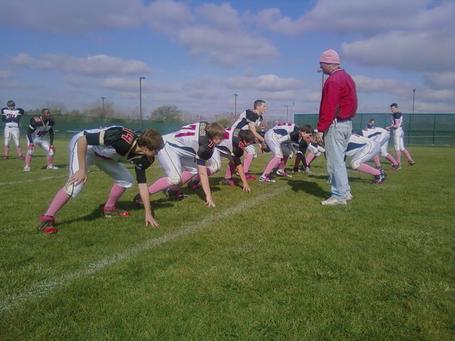 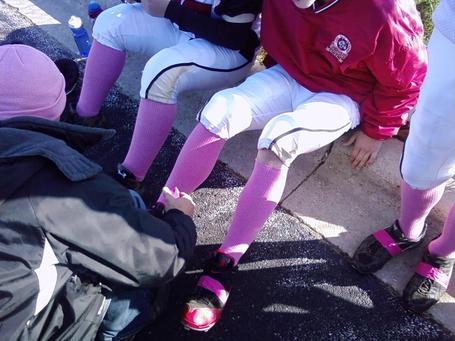 It was during that initial pink weekend by the NFL when Alec Lively, a member of the Big 10 Heavyweight (7th & 8th grade) Lake Villa Timberwolves team, wondered what he could do to help the cause.  Alec's paternal grandmother Carol is a Breast Cancer survivor, and Alec wanted to honor her by doing something just like the NFL players.  He asked his father James, an assistant coach on his team, how they could make a difference.  A few emails later and the entire Lake Villa organization was soundly behind what Alec and James wanted to do.  When James asked the team if they would mind wearing something pink (remember these are 12-14 year old kids) for breast cancer awareness he received an enthusiastic 100% participation.

Last Sunday during their game against the Barrington Broncos the Timberwolves Big 10 Heavyweight team all wore pink socks (as did a few other LV teams), they had pink ribbon stickers on their helmets, pink athletic tape, and the coaches wore pink hats for the cause.  The pink out will continue when the Timberwolves play their final regular season games this weekend. 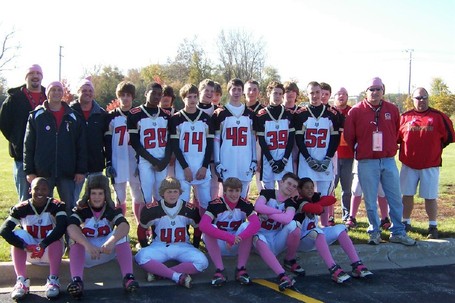 Here's another blog about the Lake Villa Timberwolves and a couple other pictures from that Sunday.  SN LINK