Share All sharing options for: The Season in Quarters: Green Bay Packers 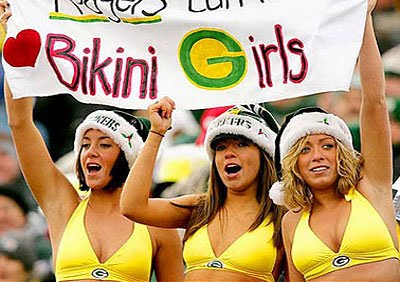 Something tells me though that 2009 will be a different story.  During this past offseason, most people thought that the North would be a battle between the Bears and the Vikings, with few folks considering the Packers into the equation.  After all, last season they only tallied 6 wins, and this season they are undergoing a defensive overhaul, bringing in Dom Capers and his 3-4 scheme.

But, the Packers are showing that they are at least going to ruffle some feathers in the North, having a dangerous offense (if they can protect Aaron Rodgers), and a defense that is doing quite well, despite being in its first year.  With that being said, and with the potential number of wins from the Vikings and Bears, the North is likely to see 3 teams with 9+ wins.  I figure a 12 win season is what it will take for the division winner.

Yesterday, we looked at the Bears season broken into quarters, and how we are on pace after the first quarter to get to that 12 win mark.  Now, let's take a look at the Packers, and see what type of football lies in front of them over the next three quarters of the schedule.

Notes: Green Bay finished this quarter at 2-2.  They are scoring plenty of points offensively, but gave up 30+ points in each of their losses.

Notes:  They will get a Bye week before hosting the Lions in week 6.  Having played the Vikings tough in the first meeting, it is a possibility that they pack ends this quarter of play at 4-0.

Notes:  Three home games in this stretch, GB could end up posting a 3-1 record in this quarter.

Notes:  The Packers will have three tough away games, and their ability to protect Rodgers will likely determine their success through this stretch.  Their defense should be completely jelled at this point, and a 2-2 record would be considered positive through the final quarter of the schedule.

Of course, I am not predicting this from too much certainty, but it is not altogether unlikely either.  If the Packers are able to post these quarterly records, they will end up at 11-5.  Maybe not enough to win the North, but certainly enough to contend.