The Season in Quarters: Minnesota Vikings

Share All sharing options for: The Season in Quarters: Minnesota Vikings 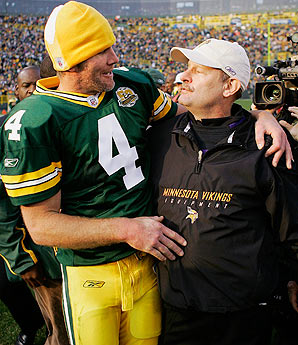 The defending NFC North champs had one of the most interesting offseasons of any team in the league this year, and they have stayed in the headlines thus far into the regular season.  From the perspective of a fan within the NFC North, an entire boat load of thoughts, opinions, and even emotions can swell up when talking about Brett Favre joining the Vikes.  But simply from a football perspective, those guys are playing some great football.

The question is, can they continue their high-level of play throughout the rest of the season?  Let's take a look at their season broken into quarters.

Notes:  It's always tough when you open up with road games, especially with a new QB.  But a 4-0 record with two wins coming within the division is huge.  The last time the Vikes started 4-0, they ended up 9-7 and missed the playoffs.

Notes:  This quarter should be tough for the Vikes.  Injuries could play a factor as their bye week does not come until after the 8th game.  Coming out of this quarter with a 2-2 record would be considered a good thing for the Vikes.

Notes:  After having the bye week, Minnesota has a nice 3 game home stand.  They could win anywhere from 2-4 games during this stretch.

Notes:  Last season, the Vikes finished strong in the final four games, winning three, including two on the road.  Depending on where the Giants are in their division, the Vikings could end up playing against a lot of back ups.

My thoughts are that it will take 12 wins to take the North division this year, and the Vikings definitely have the schedule and the talent to approach that number.  How well Brett Favre and Percy Harvin can hold up will definitely play a factor.

You can check out Chicago's season in quarters here, and Green Bay's here.