The Bears will be sitting on their couches, and checking their fantasy teams like the rest us this Sunday. Although, that shouldn't be anything new for Juaquin Iglesias. So, while we're on the bye, let's:

1. Recap last week
2. Look at some key numbers
3. Talk about wide receivers, and
4. Take a look at the division

The Bears completed Lovie Smith’s 1st quarter of the season with a convincing 48-24 victory at home over the Detroit Lions. It was a tale of two halves. The Lions came into Soldier Field on a high note, after winning for the first time in their last 20 games, and picked up were they left off in the first half. Rookie QB Matthew Stafford looked pretty sharp picking away at the Bears soft secondary, but Jay Cutler answered him, and the first half ended in a 21-21 tie. The game shifted on Johnny Knox’s TD return to open the second half, and the Bears pulled away to a large margin of victory.

Among the positives of the game were Matt Forte’s two big runs (61 and 37T), as the running game had not made much impact in the first 3 weeks of the season. On the flip side, the Bears still struggled in pass coverage, and saw many of their blitzes get stonewalled once again. They’ll have the bye week to remedy some of the problems and get healthy for a trip to Atlanta on Sunday Night Football next week.

14.0: The Bears current sack total, ranking them 3rd in the league behind the Vikings (16.0) and Broncos (15.0). Last season the Bears finished with just 28 sacks. In four games this year, they’ve already reached half that total. Adewale Ogunleye leads the Bears with 4.5, and only 4 of the sacks were recorded by non lineman (Manning, Briggs, Roach, and Afalava).

3.8: The Bears current team rushing average per carry, a point down from last year’s final average of 3.9.

News around the league (six degrees of separation from Juaquin Iglesias). 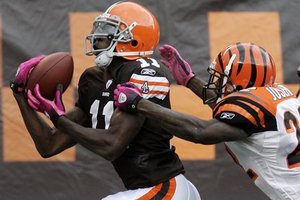 This weeks NFL headliners were both WR related. 1st round pick Michael Crabtree finally signed a contract with the 49ers. It’s hard to say if Crabtree will have any significant impact for the 49ers this year, after such a late start. The other big news: the Cleveland Browns traded Braylon Edwards to the New York Jets.for special teams player Jason Trusnik, WR Chansi Stuckey and a pair of draft picks.

Edwards caused some problems in a Cleveland night club this weekend, punching Lebron James' friend... and that seems to be his plane ticket out of town (who knew the King really is the King of Cleveland?). However, last Sunday Derek Anderson threw the ball to rookie WR Mohamed Massaquoi a whopping 13 times, finishing with 8 catches for 148 yards. With Edwards now out of the picture, Massaquoi is now the Browns default #1 WR.

Massaquoi was one of the names that draft experts were linking to the Bears last April. However, with Massaquoi off the board and unable to work a deal with Arizona for Anquan Boldin, the Bears traded out of the 2nd round entirely, and eventually selected Oklahoma WR Juaquin Iglesias (pick #99) in the 3rd round.

Fellow rookie WRs like Massaquoi (CLE pick #50), Percy Harvin (MIN pick #22), Kenny Britt (TEN pick #30), Mike Wallace (PIT pick #84), Louis Murphy (OAK pick #124), and Johnny Knox (CHI pick #140) are all having immediate impacts on their teams. However, Iglesias hasn't even been activated on a game day yet, and has been absolutely buried on the depth chart below Rashied Davis and former practice squadder Devin Aromashodu. This is not exactly a good indicator for the future.

I normally would give a rookie WR more leeway, especially since trends in the NFL lean towards the "magical 3rd year." Heck, last year we saw Earl Bennett be a total non factor, while he got acclimated to the league. However, the Bears, Titans, and Jaguars presented perhaps the easiest opportunity you'll ever see for a rookie WR to earn playing time in this league. Just ask Johnny Knox, Kenny Britt, and second year man Mike Sims-Walker. But, thus far... Iglesias has completely dropped the ball… literally.

So far the Vikings haven’t allowed a rushing TD yet*… only the 49ers can share that honor. However, the Vikings are allowing 3.7 yards per carry and 89.5 yards per game this year (vs the Browns, Lions, 49ers, and Packers).  While those numbers are very nice, it’s up from 3.3 and 76.9 last year. Expect those numbers to increase when they face the Ravens and Steelers in back to back weeks (6 & 7).

The Packers offensive line continues to get thrashed, allowing 20 sacks in 4 games. At this rate, Aaron Rodgers might not survive the season in one piece. The bye week couldn’t come at a better time, and I’m sure Rodgers will spend much of it in a hot tub.

Matthew Stafford update*: After a horrendous start for the Lions in his 1st two games (1 TD to 5 INTs and a QB rating of 40.5), the #1 pick has turned the corner with a win vs (87.8 QB rating), and a 296 yard day against the Bears (89.6 QB rating). With targets like Calvin Johnson and rookie TE Brandon Pettigrew, Stafford should settle in nicely, as long as he stays healthy. He left the Bears game late in the second half with a knee injury, and hopefully will not miss too much time.

*I’ve been forecasting that the Vikings days of dominant run D are nearing an end, mainly due to Pat Williams turning 37 years old.
*I'll keep tabs on Matthew Stafford all season, as I eventually try to draw a comparison to Troy Aikman, who started every game for the 1-15 Cowboys in 1989, after also being the #1 pick in the draft.