Ready for SNF? I am...Prime Rib and Prime Time!

The Bears will be preparing for the "Blitzing Birds" of Philadelphia.  Think we can handle it?

6 reasons why the Bears' franchise is inept.  What would your top-6 be?

SBN's week 11 Power Rankings.  Adam, how high did you put the Bears on your ballot?

Bob LeGere says to throw it to Forte.

LeBron James to the Browns.  Any Chicago athletes you'd like to see on the Bears?

Earl Bennett says that Cutler will bounce back.  What about the OL Earl?

Chicago Rush returning in 2011.   Do you watch the arena league?

Bob Costas: "It's obvious that they have decided that there is nothing that they can add to it. What else can they say? The team has been playing poorly."

Cedric Benson talks about the addition of Larry Johnson.  A wee bit concerned there, Ced?

Sunday is a must-win for both the Bears and the Eagles.

Brad Childress extended through 2013 in Minnesota.  I'm glad he's not our coach.

If you come across anything Den-worthy, let us know!

Not Bears related, but I'm dropping it in here anyhow.  Georgia's mascot UGA VII died of a heart attack.  He was 4 years old. 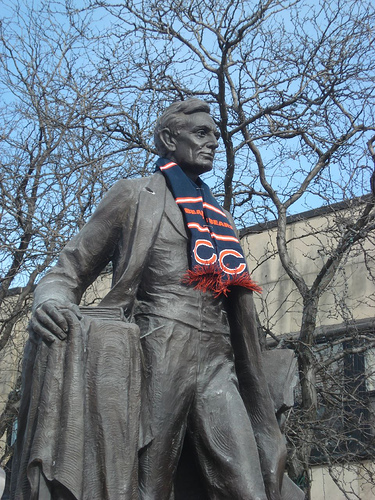