Share All sharing options for: Another Possible Ron Turner Replacement

My plan was to have this post up on Thursday, but after another tough loss, with another bunch of questionable calls by Ron Turner, and after seeing the regression of a Pro Bowl quarterback, I had to chime in early.  The Bears offense is in desperate need of a coach that can coach.

Last week I speculated the Bears could hire Charlie Weis as offensive coordinator if the Fighting Irish let him go.  After losing again this weekend that possibility is gaining momentum.  I honestly think Weis would be a great fit as the OC in Chicago, but it's still a far fetched idea.  After the jump let's look at another possible replacement for Turner... 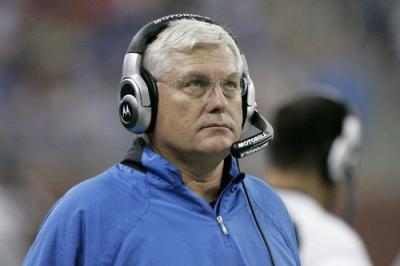 Since Lovie Smith isn't going anywhere and he has final say so in regards to his staff, I thought the next best place to look for a replacement for Turner is in Smith's past.  Mike Martz is widely regarded as a great offensive mind (and a slightly warped mind); his "Greatest Show On Turf" Rams offenses won a Super Bowl with him as the OC and were NFC Champs in 2001 with him as the head coach and Lovie as his defensive coordinator.  Martz and Smith are good friends, yes even with Martz's critical words about Cutler a while back, and don't forget it was Martz that was highly complimentary of Smith while he was pursuing a head coaching job.

Can a Mike Martz offense work in Chicago?  Martz likes to use 4 and sometimes 5 wide receiver sets to spread out a defense.  His takes part of his philosophy from coaching legends Sid Gillman and Don Coryell (Wiki-links provided), and is without a doubt a pass first coach.  But don't forget what incredible numbers running back Marshall Faulk put up in his offense, if he has the talent he'll use it..  Martz will stretch a defense vertically as well as horizontally so a solid pass blocking line is critical.  As is solid footing, something that was again called into question Sunday night.

*  Allow me to go on a tangent for a sec... It's time to install Field Turf at Soldier Field.  With the Tampa 2 style of defense that values speed first and foremost it's a wonder Field Turf hasn't been installed.  And now with an offense that looks like it'll get away from the running mentality.  Is there a better time to go artificial than the 2010 season?  OK, back to Martz...

With the potential for bad weather in Chicago, I'm not sure a pass oriented offense will ever work.  Definitely not on natural grass, but with the investment you just made in Jay Cutler, you have to make him the focal point of the offense.  Then again, a pass happy offense worked in Buffalo to the tune of four straight AFC titles, Brett Favre made a name for himself winning games on the frozen tundra, and I'll even throw in the Patriots outstanding cold weather play with Tom Brady under center.  Finding the right compliment to a passing game in Chicago for those December/January games could be done, but could they be done with Martz as OC?

A Mike Martz offense hasn't in the past asked the QB to roll or bootleg much, two things we all want to see more from Cutler, but instead is a timing offense that requires the QB to hit his spots on the field.  Cutler has the arm strength and accuracy to succeed in any offense and I think Martz is smart enough to tailor some stuff to his personnel.

With so many players running around it puts the receivers in position for a lot of yards after the catch, something Devin Hester should excel at.  His offenses haven't utilized the tight end much, but Greg Olsen is athletic enough to be used all over the field, and could find a place in the offense.

When Martz was OC in San Francisco for his one season in 2008 he guided their offense to their best output in five years.  When in Detroit he coordinated Jon Kitna to a 4,000 yard season in 2006 even though the Lions only won 3 games, and in '07 Kitna again surpassed 4,000 yards and the Lions improved to 7 wins.  Martz wasn't brought back in '08 and the Lions failed to win a game and their offensive numbers plummeted.

Martz is admittedly a little odd, a little egocentric, and sometimes hard to get a long with, but his friendship with Lovie and his familiarity with Rod Marinelli, not to mention his strong desire to get back into the NFL, and I think Mike Martz would be a good fit in Chicago.