Share All sharing options for: Another Potential Bears O.C., Weis, Martz and now ...

There is a constant theme of comments being left on the threads of the series I'm doing looking at possible new offensive coordinators for the Bears.  Many are wondering, why hire a new OC instead of a new coach.  And some are even looking for a complete overhaul, from GM on down.

At this point in the season, even with as bad as things have gone, I still don't see them launching Lovie Smith.  It's not in the character of the franchise to eat a contract as big as Smith's or Jerry Angelo's for that matter.  The odds say that if a move is made it'll be one of the assistants that is canned.  Look at the last few years and the coaching turnover on the defense.  It's logical to assume that someone on the offense will be fired after this season.  Sorry Ron Turner.  It's possible the Bears will clean house, and depending on the remaining games, it may even make the most sense.  But until we see how the '09 season plays out, there's no way to know.  In the mean time speculating on a new offensive coordinator will have to suffice.

After the jump I'll look at another potential candidate, one with Denver Bronco ties, but not one of the names you'd expect. 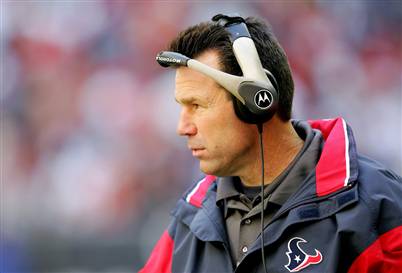 Gary Kubiak has been on the hot seat for a couple years now.  Every time a "hot seat" list is compiled the Houston Texans coach is on it.  I don't exactly agree with it as he's had some injury issues and he plays in a tough division, but .500 seasons just aren't acceptable in this day and age of the NFL.  He had another tough home loss this week and is sitting at 5-6.  The Texans have some winnable games on their remaining schedule, but if they don't sneak into the playoffs I think they'll make a change at the top.

If Kubiak is fired he could be in the hunt for an NFL head coaching job, and he'll no doubt receive some offers from a few colleges, but I see him as an NFL lifer.  He'll look to get into the best possible situation for himself and coaching Jay Cutler would appeal to him.  He runs a very similar offense to the one he coordinated in Denver under Mike Shanahan, a more run heavy variation of the West Coast offense, and it's an offense that Cutler would be familiar with.  He even joked upon his hiring by the Texans that his playbook will only be in a different shade of blue.  Even though Kubiak likes that power running style of the old Bronco teams, he isn't afraid to put the ball in the air and utilize the talents of his quarterback.

He coached Steve Young to his best season while the QB coach in San Francisco, and had John Elway playing the best football of his career while coaching in Denver.  He coached Brian Griese to a Pro Bowl season and helped Jake Plummer get his name in the Bronco record books.  And his offense in Houston has never been the reason they aren't winning more games, Matt Schaub (when healthy) puts up really good numbers.

Gary Kubiak knows offensive football and would be an outstanding fit in Chicago.