First reported by Adam Schefter, the Bears have signed LB Cato June to a contract.  The 6'0, 225 pound linebacker was drafted in the 6th round of the 2003 NFL Draft by the Indianapolis Colts.  He spent 4 years with the Colts, and two years with the Buccaneers.

June was signed to a 1 year contract with the Texans in 2009, but placed on the IR in August after breaking his forearm. He was released with an injury settlement in September.

This news may signal that Lance Briggs may miss significant playing time after injuring his left knee in this past Sunday's loss to the Vikings.

If Briggs is going to be sidelined this week, or maybe for the remainder of the season, June seems like a logical candidate to contribute at weak-side linebacker. Jamar Williams filled in for the injured Briggs against the Vikings, and may also be in the mix if Briggs can’t go.

June certainly knows a thing or two about playing in a cover-2 defense. The linebacker spent four seasons in Tony Dungy’s system in Indianapolis, then moved on to Tampa Bay for two seasons, before breaking his forearm in Houston during the 2009 preseason. 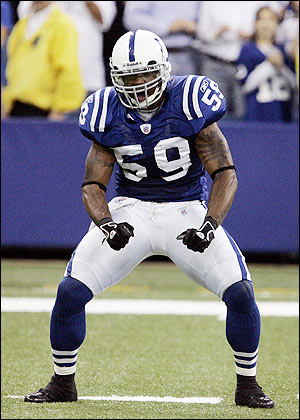