Is Jeremy Bates a possibility for Bears O.C.?

Share All sharing options for: Is Jeremy Bates a possibility for Bears O.C.?

If Lovie Smith isn't axed at seasons end, and a staff wide housecleaning doesn't take place, we all know who the fall guy will be.  In my ongoing series looking at possible Ron Turner replacements (Charlie Weis, Mike Martz, & Gary Kubiak), I come to another name with ties to Jay Cutler.  Jeremy Bates.  Bates, who was his QB coach and play caller his last season in Denver and is the current Assistant Head Coach of the Offense at USC.  Bates is an oft mentioned and popular name here on the threads, but the fans at Southern Cal may not shed a tear if he's hired away. 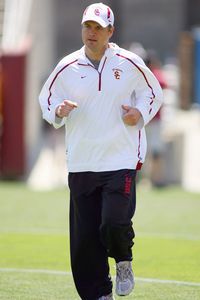 From the Orange County Register, in an article titled "USC football: Glory days over if Bates stays", and in reference to USC Freshman QB Matt Barkley:

Barkley needed a teacher who would smooth his rough edges and elevate his game. Instead, Carroll handed him over to SlingBates.

Aside from Bates' obvious shortcomings as a play-caller, his failure to develop Barkley alone should be enough for Carroll to help him find a job elsewhere.

From the Bleacher Report referring to the possibility of Bates going back to the NFL:

That crescendo of silence you just witnessed was a collective yawn from Trojan nation.  Bates, who has been roundly criticized for his unimaginative offense by USC fans, would not address the issue when asked by reporters.

From the Los Angeles Daily Times:

With USC ranking 100th nationally in third-down conversions and 49th in total offense, it's doubtful too many fans would be upset if Bates did return to the NFL.

How fair is the criticism?  The 2009 version of the Trojans isn't exactly as loaded as teams past, and with a true freshman at QB and an underperforming offensive line Bates had to work with what he had.  His last year in Denver was a different story, helping guide that offense to #2 overall, and assisting with Cutler making the Pro Bowl.

The hottest rumor circulating Bates is him returning to coach with Mike Shanahan if he is hired to coach somewhere.  If Shanahan is hired the odds of Bates to Chicago would decrease, but if the Bears can act quickly they may get their guy, if Bates is indeed their guy.

Bates called plays for Shanahan the last season they spent in Denver so we all know the West Coast style of offense he likes to run.  That version loves the run a bit more than the traditional West Coast O, and will utilize a plethora of roll outs for the QB.  Then again who knows, his year at USC working with Pete Carroll may have altered his philosophy a bit.

The thing I like about Bates is he's a football lifer.  Son of a coach, Jim Bates, ball boy at 5 for Texas Tech, QB at Tennessee then Rice, coaching career kicked off spending '02-'04 in Tampa Bay with HC Jon Gruden (and some time with then Bucs QB coach John Shoop, should that disqualify him from consideration?) first as offensive quality control coach then his last year as QB coach, he was QB coach in '05 with the Jets, then '06-'08 he was in Denver under Shanahan, first working with the OL, then QB/WR, then QB coach/play caller.  The recent trouble in USC is the only blip on his resume.

Here's the statement released from Cutler about Bates after he was hired to coach at USC:

"Jeremy is one of the best offensive minds in football. He was extremely innovative with our offense and took our playbook to the next level with some of the things he did, keeping defenses off balance and changing our look but at the same time keeping it simple for us players. Some of the things he did were amazing to watch. He was always watching other teams and coming up with new ideas for our offense. He helped me grow into my third NFL season and helped me reach the Pro Bowl along with some of the other goals I set for myself. As a unit, our offense became one of the most productive in the league with Jeremy calling plays. He brought a lot of excitement to the meeting room and on the field. He made me want to come to work every day and get better. Jeremy will do great things in his new role, and USC couldn't have picked a better guy."

Bates is the kind of young, energetic coach NFL owners love taking chances on.  He will be an NFL head coach some day.  Will he spend another year or two honing his craft as an offensive coordinator in the NFL?  This off season may be the perfect time to hire Bates, but will the Bears have the foresight to hire him?