Lovie Smith, Ron Turner and Co. escape from the Chicago microscope for one weekend and head to Baltimore.  The Ravens are a team fighting for a wild card birth, but the only wild card on the Bears is: which player will throw the coaching staff under the bus next? 3:15pm CT on FOX.

The Ravens played host to the Lions last week... who were more than gracious guests, as they brought plenty of party gifts for the holidays. Detroit hand wrapped a 48-3 victory for their hosts, allowing the Ravens to score 6 TDs...  including a 59 yard TD run by Ray Rice, and a 62 yard TD reception by Derrick Mason. Nearly all of the damage was done on the ground, as Baltimore racked up an incredible 308 yards rushing (I loved every bit of it, as I had Ray Rice in my fantasy lineup... and McGahee on my bench).

The Bears put themselves in a position to play spoiler and beat Green Bay at home, but ultimately fell short in a 21-14 loss. The highlights of the day were 13 penalties, two timeouts wasted on one lost challenge, and a team leading 8 catches and 1 TD for Devin Aromashodu... who basically wasn't allowed onto the field all season prior to this game. The long list of penalties, repeated mis-communication issues, bizarre coaching decisions and poor clock management have become a staple of the Chicago Bears 2009 season.

BAL - Half the roster is listed as questionable, most noteworthy are 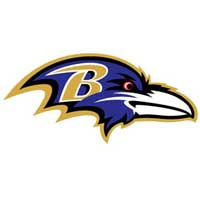 When the Ravens have the ball.
The Ravens are a little similar to the Bears, in that they've been looking for a QB for forever, and finally got one in Joe Flacco. They also don't have a WR who's really worth a crap on their entire roster. However, this team can run the ball with the best of them. The Ravens are averaging 4.6 ypc, and have 19 rushing TDs. In comparison, the Bears are averaging 3.4 and how a lowly 6 TDs on the ground. RB Ray Rice is the center piece of the whole offense... leading the team in both rushing and receptions (ala Matt Forte version 2008). And, Willis McGahee vultures many of Rice's TDs in the red zone. When Flacco's looking anywhere but Rice's direction, he finds trusty veteran WR Derrick Mason, who wasn't even going to play this season, save for a last minute decision to push off retirement.

The key match-up for the Ravens: RB Ray Rice vs MLB Hunter Hillenmeyer
Rice is the Ravens #1 receiving option, and Hunter will have to shadow him in pass coverage all day. Considering that Hunter couldn't keep up with TEs during his career on the strong side, this should be interesting to say the least. Maybe Hunter can slow him down with savvy investment talk.

The X factor on offense for the Ravens: WR Mark Clayton
No... this isn't Dan Marino's Mark Clayton, but considering Derrick Mason's age, that wouldn't be impossible. Clayton is the Ravens best deep threat, and with the Bears atrocious safety combo, deep route runners are always a problem.

When the Bears have the ball.
In between the finger pointing from the players to the coaching staff, the offense will actually be be asked to run some plays as well. Perhaps this is the week that Cutler says "F" it, and starts calling his own plays in the huddle. Anything would be an improvement at this point. Will Devin Aromoshodu see continued action, after his career game last week? Or will he return back to his seat on the bench? Will some more changes happen on the offensive line? Or will the coaching staff stick to the crappy status quo? Sadly, these are the things we have to look forward to on Sunday.

The key match-up for the Bears: LT Chris Williams vs DE Trevor Pryce and OLB Jarret Johnson
All eyes are on Chris Williams, as we watch to see if he's really our LT of the future. Pryce and Johnson each have 6 sacks on the year, and should provide a decent test for the young tackle.

The X Factor on offense for the Bears: Contract Incentives
Who's got bonuses to make? Who's looking forward to testing the FA market? We'll see on Sunday.

The Bears season is lost, but the Vikings and Packers are fighting it out for the division crown, and both are likely to make the playoffs. That's sickening to me. I'll just leave it at there.