Pure Speculation Here: Bears will not hire a "Name" O.C.

Share All sharing options for: Pure Speculation Here: Bears will not hire a "Name" O.C.

After floating three big name possibilities, Weis, Martz, and Kubiak, and one lesser known yet highly qualified name, Jeremy Bates, for potentially replacing Chicago offensive coordinator Ron Turner I figured it was time to go the route the Bears are more likely to head.  Now I have zero inside information, this is all pure speculation on my part, but in keeping with the kind of hires the Bears make this name would make sense on a lot of levels.  Tom Clements.  Yes, Tom Clements.  Yes, that Tom Clements.  Oh, you never heard of Tom Clements?  Well then, take the jump with me... 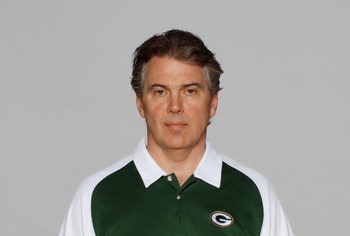 Clements is currently the quarterbacks coach with the rival Green Bay Packers.  Now many of you will automatically eliminate him from consideration since he's one of THEM!  But check this...  His first NFL coaching job was given to him by none other than Iron Mike Ditka!  That should cancel out any Packer hate towards the guy.  Clements was the QB coach for Ditka's Saints from 1997-99.  He was also QB coach in Pittsburgh under Bill Cowher from 2001-03 and the QB coach in 2000 for the Chiefs helping Elvis Grbac get into his only Pro Bowl.  Before the NFL he was on staff at his alma mater, Notre Dame, serving as QB coach (1992-94) and WR/assistant head coach (1995) under Lou Holtz.

Before you start to think, ‘he's a positional coach, we need an experienced O.C.', he does have some experience coordinating an offense.  He was O.C. in Buffalo from 2004-05, the following is from his Bio on Packers.com:

In 2004, the Bills' offense increased its points output by 152 and became only the ninth team in NFL history to score more than 30 points in six straight games. In addition, Buffalo reduced its number of sacks allowed from 51 to 38, fewest by a Bills team since 1999.

On an individual level, Clements' offense was highlighted by RB Willis McGahee, who became the fifth running back in Bills history to register back-to-back 1,000-yard seasons, covering each year of Clements' tenure. In addition, quarterback Kelly Holcomb set a club record in 2005 with a 67.39 completion percentage, surpassing Jim Kelly's 1991 mark, 64.14 percent.

I've always admired the Packer offense, through the Brett Favre years, and now the Aaron Rodgers era, their offense is impressive.  Look at the QB position in Green Bay the last four years.  Brett Favre was thought to be near the end after throwing 29 picks in 2005, then after Clements came aboard in '06 Favre brought his interceptions down to 18, then in 2007 he found himself back in MVP talk.  He has Rodgers playing outstanding football this year after a real good 2008.

Taking a flyer on a guy like Clements is exactly the kind of thing Bears management would do.  He should come relatively cheap, as he's not a "hot" up and coming coach, and he wouldn't be perceived as a threat to Lovie as someone who potentially could take his job.  But his 17 years of coaching and his prior experience as an O.C., not to mention his extensive work with quarterbacks, is exactly the kind of coach the Bears should look into hiring.  Would I rather see a splashy, more well known hire...  I don't know...  but I do know that a change has to be made and I still have my doubts it'll be more than just Ron Turner taking the fall.