The case for changing the modern football helmet.

Share All sharing options for: The case for changing the modern football helmet.

It may sound crazy, but it's an idea that's received a small amount of attention with the recent focus on concussions and how to prevent them. The hard shelled helmet that we're familiar with came around in the early 80's, but hard shelled helmets in general have been around since the 50's.

The helmet was originally added to the game in order to prevent terrible injuries such as skull fractures that could literally cause sudden death if severe and unlucky enough, but people point both to the old style hard leather helmets and to the new style rugby helmets as protective equipment that both does the job it was designed for, and doesn't turn the players into human missiles.

All protective devices have a core purpose of preventing injuries, and sadly the modern football helmet is failing miserably at this task. We don't see skull fractures or anything like that, but instead due to the invulnerable nature they appear to provide generations of football players have been essentially taught to lead with the helmet on all possible tackles. Granted, it should be helmet to chest, but as that's only a few inches from helmet to helmet, and it's rare that a tackle is straight on in a game predicated on evading tackles.

So what does that give us? It gives us players leading with their helmet as they've been taught since peewee leagues, and it gives us lots of really terrible injuries of various kinds. The Tillman injury this week versus the Vikings is a prime example of the kind of injuries this helmet can cause. Since it turns the players into head first missiles they are literally bringing a massive blow with an extremely hard and unforgiving object into either pads that are forced to protect in some way against the blow, or into very vulnerable flesh and bone that can withstand the blow about as well as a person can withstand the blow from an aluminum bat.

That's only on the receiving end of the equation, and as we know every action has an equal and opposite reaction. We've seen tons of injuries stemming from leading with the helmet and they are usually of the worst kind being life threatening and sometimes altering or taking neck injuries. The neck simply isn't built to be a stabilizer for a spear head, it can be assisted with the collars you see a lot of players wisely wear, but it's still a game of roulette when you're laying down the lumber on an opposing player when you're going to come up on the losing end of the impact.

Now then, I'm going to stop short of advocating this change simply because I've not done near enough research or thought to put a stamp of approval on the idea. However, we've made many changes to the game for the protection of the players for much more dubious reasons such as the elimination of the "horse collar" tackle. The problem is as long as players wear such tank like helmets, they are going to continue to use them and themselves as human battering rams. While it's extremely fun to watch, something has to be done to not only help eliminate the debilitating effects of concussions on players that aren't QB, and the horrible injuries we see to players like Tillman coming from the practice.

As far as possible solutions, there are more than a few and thousands more waiting to be thought of. One such idea I've seen floated around is a modified procap type apparatus for a new helmet design. For those who haven't seen a procap in action, I'll provide a little bit of a visual aid. 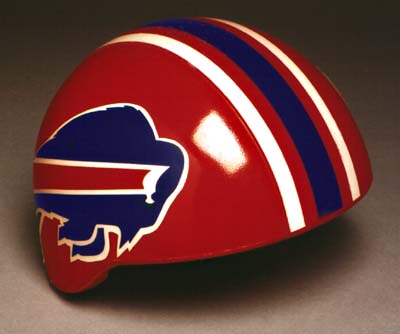 Essentially it adds a somewhat crushable softer outer shell to the existing hard shell helmets. The upside of these are that they can be put on to any helmets you have out there today, and they supposedly do help lessen the impact the so called cumulative smaller blows that many lineman and defensive players receive. The downside is that they do nothing to stop the neck injuries that occur from leading with the helmet, and don't do a lot to lessen the damage of a helmet to body hit.

Another option would be to roll the clock back, and then roll it forward again by going back to the soft helmet, but upgrading the technology into something akin to a modified rugby helmet. 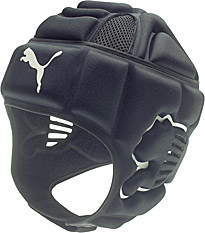 As you can see, these are very reminiscent of the late 40's hard leather helmets, however with much improved shock absorption technology. They apparently still aren't fantastic at completely preventing concussions, however they do their primary job of preventing fractures and other such damage quite well. Also, due to the lack of a hard shell they tend to discourage reckless leading with the helmet during tackles. These aren't bad, but I personally don't think they are ready for prime time in the slightest.

Also another currently available "option" is something akin to the modern hockey helmet. An example would be the m11 from Cascade. 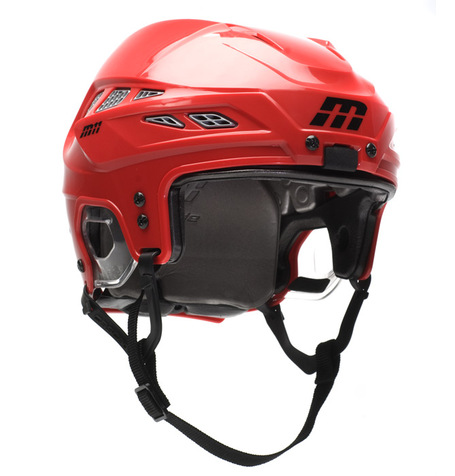 As you can tell from the design it's very much reminiscent of a lacrosse helmet, minus the cage. In fact, if you took the technology from this helmet, and added to it a modified lacrosse cage, you'd come up with what I think might be the best option for future development if the NFL actually decides to go down the path of eliminating leading with the helmet altogether. Whatever they are doing in this helmet, apparently it's above average in reducing the G forces applied to the head to start with, but where it really shines is reducing the damage of repeated impacts in their test, exactly the kind of thing we're now seeing warnings about in the trenches of NFL O v D Line.

There are people still making the case for going helmet less, but I think that's a recipe for disaster and honestly something I don't want to see. I love the game of football, and I love seeing it played hard and fast like it should be, but when you're playing it like this accidental head contact is going to happens so some sort of protection will always be required. The question is do we keep going in the direction we are now, trying to make an invulnerable cage for the head and neck of the players, or do we solve the underlying issue that was caused by the helmets in the first place.

As an added bonus, I figure I'd add a link to the story I read about the history of the football helmet that inspired me to write this small piece.