Playoffs? We talkin' about playoffs?!?

Share All sharing options for: Playoffs? We talkin' about playoffs?!?

I know, it's a mixed quote.  Two of the best from Jim Mora and Allen Iverson.  But here the Bears are at 5-7.  Lovie wants to keep his job, so he's going to keep "plucking" that chicken (NSFW audio).  Until the Bears lose another game, he's going to do whatever he can to win.  A lot of people disagree with this, but Lovie's still the coach and that's what's going to happen.  The Bears must go 9-7 to have even a prayer at making the playoffs.  Just what is he up against?  What does the NFC playoff picture look like?

No doubt Minnesota and New Orleans will win their divisions.  Arizona looks like a lock to win their division.   Dallas, New York, and Philadelphia will be fighting for the East.  The Giants and Eagles play next weekend, while Dallas has the Chargers in San Diego.  Will the Cowboys wilt in December again?  The Eagles get the Cowboys in week 17 as well, so they control their own destiny.  Win those 2 games and they'll probably win the division.  This is what the Bears/Lovie are hoping for.  If Philly isn't in the Wild Card picture, then Philly's tiebreaker over the Bears is meaningless.  A 9-7 Philly team that isn't the division winner pretty much knocks the Bears out of the playoffs.  All three teams have a tough schedule remaining too.  I'm not confident they'll all finish with 10 wins.

Green Bay is way out in front of the Bears for a Wild Card berth.  GB plays a tough Baltimore team tonight.  The Bears and Packers play next week.   The Pack also have Pittsburgh and Arizona on their remaining schedule.

Atlanta has the Saints next weekend, then Jets, Buffalo, and Tampa.  If Atlanta goes 3-1 over those 4 games, the Bears will be out.  They lose their tiebreaker to the Falcons.

San Francisco has Arizona and Philly in the next 2 weeks, they need to win out also to be a factor.

Carolina has the Patriots, Vikings, Giants, and Saints the next 4 weeks.  If they win out, that will be one of the most impressive 4 weeks any team will have played this season.

Seattle has a light schedule outside of Green Bay.  The Week 17 game against the Titans might not mean much to Tennessee, or it might?  Seattle needs to win out to have any shot though.

What does all this mean?  To mean and you, the Bears season ended on the Metrodome turf last week if not sooner.  To Lovie Smith, the Bears mathematically still have a chance to make the playoffs, and he's going to coach with that goal in mind.   A surging Philly team, a tanking Dallas and Green Bay, a Giants team to stumble again, an Atlanta team to also stumble, plus the Bears winning out = playoffs.  Pure fantasy? or a coach's only hope? 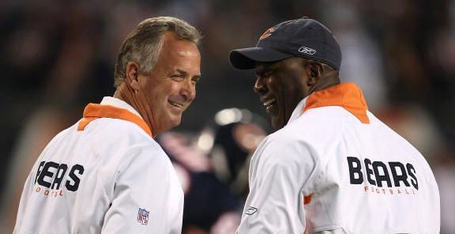