In honor of going back to school myself, I figured why not present a little learning to you.  If you are unfamiliar with the concept of the Tampa-2 or our own personal Lovie-2,  scespy12 has provided us with a nice tutorial for those of you who are a little unclear. Thanks to him! 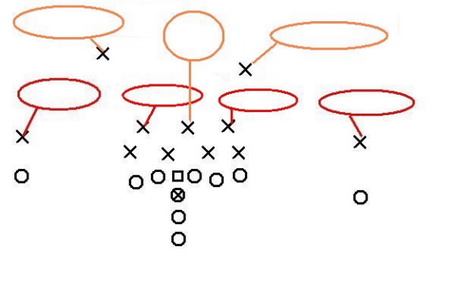 In formation, it is a general 4-3, which is four down lineman with three linebackers; Two outside (the strong side called ‘Sam’ and the weak called ‘Will’) and a middle linebacker (called ‘Mike’). It employs a two-deep zone (evidenced by the safeties in the diagram); thus the 2 moniker. The factor that differentiates the Tampa from the Cover-2 is the MLB takes the deep middle of the field around eleven yards off the ball. The purpose of this is to not only allow the safeties to assist the corners in the zone, but it also shortens the roaming area of the safeties putting them in a position to make plays as well as keeping the ball in front of the linebacker (who is typically the best tackler on the team).

The secondary in the Tampa is designed for the corners to jam the receivers at the line and collect into their respective zone and pass a covered receiver off to the safeties around 12 yards off the line. The safeties are exactly what their name implies: they cover the deepest aspect of the field and are the last line of defense but they are most commonly also the playmakers. They are required to diagnose the play and are around the ball, so they are most commonly the ones with the ball in their hands after interceptions.

The defensive line in the Tampa-2 is built to collapse the pocket so they are typically quicker rather than bigger as they utilize the speed rush almost exclusively. The defensive tackles are the most important part of the Tampa line, as they are not only pass rushers but also called upon to hold up blockers in the run game. They must diagnose the play quickly and act accordingly. Since that is almost impossible to do (considering the size and speed of lineman now), they have adjusted the philosophy to have a DT called the Nose Tackle that is the run stopper and the other DT in a 3 technique called the Under Tackle that is the pass rushing specialist. The defensive ends, although not as important as the tackles, are nevertheless very important to the scheme, as this is where the majority of the pass rush comes from. They are edge rushers that must be in the quarterback’s face before he gets to his third read (which is typically the receiver that is running a postcorner or the tight end in the flat); that read usually takes a QB around 2.5 to 3 seconds so speed is essential to the Tampa end.

The line in a Tampa scheme is weak against the run….usually very weak. This is what the outside linebackers are for. The Sam backer is a space filler. His obligation is to take on the lead blocker, somewhat akin to the wedge-breaker in kickoff coverage. He allows the Will backer, the Mike backer and the secondary to flow to the ball and make the play.

Limitations to the Tampa-2

Blitzes are impossible in the base scheme, well not impossible but you give up large sections of the field to the offense. 90% of the time you see blitzes, they are not coming from the Tampa base formation. This year, the reason why the corners backed off the ball so much was they were trying to play their zone and collapse on the linebackers zone while also not giving up the big pass. Expect this to change; this does not happen in a Lovie-led defense.

This D works… especially when a master at it is calling plays.