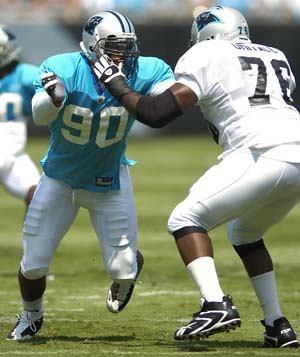 Apparently not content to have just one 'ale' on the team, the Bears have added one to be Ogunleye's offensive counterpart.  The Bears first official move in Free Agency is to sign Carolina Panther's free agent offensive tackle Frank Omiyale.

Omiyale has been signed to a 4-year contract reportedly worth between $11.5 million and $14 million.

Omiyale will be in contention for the Right Tackle position.  This may end the John St. Clair era before it even kicks off.

I don't have much on this guy; does anybody have the goods on what we just bought?

UPDATE: I know we still don't know much about the guy, but apparently we weren't the only team interested.  Up to 10 teams inquired about Omiyale.