As WCG mentioned in this post, my name is Mordecai and I'm a new writer here at windycitygridiron.  I'll be, um, tackling such things as Bears history and financial matters.  For the history part of my writing, I'm planing on doing things like book reviews, finding old pictures and game recaps and doing Forgotten Bears, a look back at Bears that you might not remember.  If you have any suggestions for old Bears players that you would like to see profiled, please e-mail me at bizzarobowl (at) gmail.com or leave them in the comments below.  Today's Forgotten Bear is a running back that people under the 60 might have a hard time remembering.  Join me after the jump, won't you? 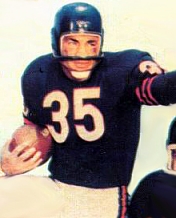 When compiling a list of the greatest Chicago Bears running backs of all time, a list which includes such legends as Payton, Sayers and Nagurski, one name is conspicuously left out, Rick Casares. Rick Casares played ten seasons for the Bears between 1955 and 1964 and was a five time Pro Bowler and was first team All-Pro in 1956. He currently ranks third for rushing yards, rushing touchdowns and rushing attempts on the Bears all-time list. He led the NFL in rushing yards in 1956 with 1126 and was in the top ten in the NFL for six straight years. In his rookie season of 1955, he led the league in rushing touchdowns, total touchdowns and rushing yards per attempt and had the longest run of the season on an 81 yard touchdown against the Baltimore Colts on October 16, 1955. To show his versatility, his 71 yard punt was the longest punt of the 1959 season.

Ricardo Jose Casares was born on July 4th, 1931 in Tampa, Florida. He moved to New Jersey where he became a champion Golden Gloves boxer in his teens. After his father's untimely death, Rick moved back to Tampa to live with his aunt and uncle. He played for Jefferson High between 1948 and 1950 leading the team to two city championships. He also excelled at basketball and track there, being named all-state in basketball for three years and winning the state title in Javelin in 1950. He was named the twelfth best high school athlete in Tampa history by the Tampa Tribune. He received a football scholarship from the University of Florida and played halfback, fullback, quarterback, punter and kicker for the Gators from 1951 to 1953. He was named All-SEC and scored Florida's first ever touchdown in a bowl game in the 1953 Gator Bowl against Tulsa. He also had a remarkable college basketball career also being named All-SEC and was the team captain in for the 1952-1953 season.

The Chicago Bears drafted Casares in the second round (18th overall) in the 1954 NFL draft; however, a brief stint in the Army delayed his professional football career by a year. Rick's rookie season started somewhat slowly for himself and the team which started 0-3. But he burst unto the scene with his first two touchdowns in the fourth game of the year against the Colts including the aforementioned 81 yard run leading the Bears to a 38-10 victory. This game kicked propelled the Bears as they went 7-1 the rest of the way to finish 8-4 for the year just one half game out of the Western Division lead. Casares lead the Bears in rushing that year with 672 yards and the Bears led the league in rushing with 2388 yards. The following season brought probably Rick's finest season as a professional when his first team all-pro season lead the Bears to their first NFL championship game in ten years. Unfortunately, the Bears got destroyed in that game 47-7 to the Giants. Rick's 1957-1961 seasons, while still productive, were nowhere near his 1956 levels and the Bears didn't win their division during this period. The 1962 season saw a steep decline in both Rick's attempts and yardage as the Bears really spread the carries around since no single player had more than 500 yards rushing. On the Bears' 1963 NFL Championship team, Casares was little more than an afterthought rushing for just 277 yards and scoring one touchdown on a pass reception. His final season as a Bear saw him net only 123 yards on 35 carries. His last two seasons in the NFL saw him in blink-and-you-missed-it stints in Washington in '65 and Miami in '66 where he played for a 3-11 expansion team. At the time he retired, Rick Casares was the Bears' all-time leader in rushing yards, attempts and touchdowns. These marks would only be eclipsed by two men, Walter Payton and Neal Anderson. His 1126 rushing yards in 1956 would be a Bears' single-season record until Gale Sayers broke it 10 years later. Rick Casares deserves acknowledgment for being an all-time great Chicago Bear that he was.