Share All sharing options for: Bears Are Working To Keep Kevin Jones 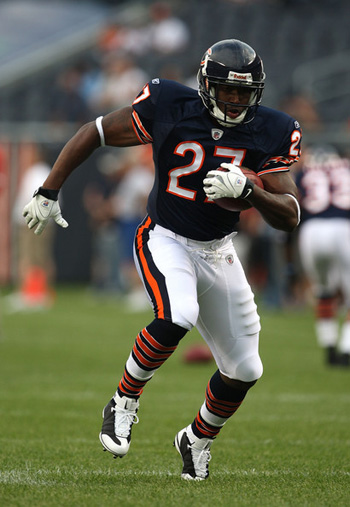 The Bears know they need to find a running back to spell Matt Forte. It appears the answer may have already been in a Bears uniform. The Bears have offered a contract to Kevin Jones. They may, however, have to wait to find out if he is coming back. Jones has received interest from the Buffalo Bills, Cincinnati Bengals, Cleveland Browns, New York Jets and Tampa Bay Buccaneers.

'I've been telling you all along, and you may have thought, 'This kid is crazy,' during last year, I want to come back to the Bears,'' Jones said. ''I like the staff; I like all the teammates. If you want an example of what an NFL team should be like, the coaching staff, everything, that's it. I'd love to be back, but sometimes business gets in the way.

''It's a negotiation process, and I am making sure I am in the right situation. The Bears expressed interest and I want to be back, but we've got to hammer out the paperwork. We'll see what happens.''

I like the move. Last year Jones was coming off of knee surgery and could not have been 100% for most of the season. He was inactive late in the season due to injuries on the special teams. Later he asked to play with the ST to get some on field time and was a very good addition.

Jones would be battling Garrett Wolfe, who Angelo and Smith have said will get his shot, to get playing time when Forte is off the field. Jones is a better back than Wolfe and if he is healthy should easily win that battle.