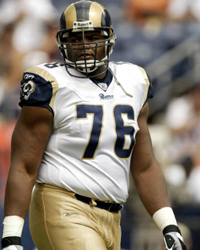 The St. Louis Rams have released 9-time Pro Bowl tackle, Orlando Pace.  The Bears may have need for blind side help depending on the development of Chris Williams, but it should not be expected the Bears have interest.

Brad Biggs believes that there will be some resolution with John St. Clair and the  Bears by the end of the week.  He believes it makes too much sense for both parties for this deal not to go through.

The Vikings' Marcus Johnson, who can play both right tackle and right guard is still looking for a new team. He is scheduled to visit the Tennessee Titans.

Despite reports stating otherwise, the agent for Khalif Barnes says his client will not sign with the Oakland Raiders.