Share All sharing options for: The 2009 NFL Draft: CB Prospects

Next in the multi-part draft breakdown are the cornerbacks. I watch a ton of college football, but I'm not Mel Kiper Jr., so all of these are up for discussion.

There were two positions that really underwhelmed at the combine: running backs and corner backs. Most of the CB's underperformed compared to expectations. However, some of the overlooked players really surprised at the combine (Sean Smith, Coye Francies); there are some diamonds in the rough to be had. The question is whether or not Jerry wants to go after a CB with a high draft pick.

Let's get it started.

Cons: Seems to gamble too many times when he's man-to-man....has a case of the Ceddy's (stutter-stepping) when he changes directions; also loses too much speed in the process....must bulk up a little bit.

Bottom line: Jenkins flat out did not impress anyone at the combine. Honestly, I believe that he's better suited for safety at this point. However, he's a smart and very physical football player that will be a top-10 pick in this year's draft. 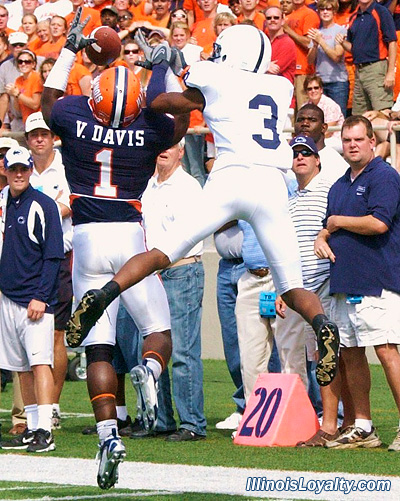 Cons: Didn't really seem to improve from 2007 to 2008....Ron Zook did not start Davis against Iowa because he didn't feel Davis was playing as well as he could (possible character issues?).

Bottom line: Personally, I like Davis more than Jenkins. If the Bears selected him, I suppose we could have picked worse players. He's a great athlete and more importantly, a smart football player.

Pros: No durability or character issues....good instincts....jumping ability and ball skills are elite....dangerous runner after an interception....wraps up in space adequately....can close quickly when blitzing.

Cons: Won't deliver any huge hits....speed allowed him to eliminate mistakes during college; most likely won't be able to do the same at the NFL level....tight hips don't allow him to drop back quickly....has an inflated sense of worth.

Bottom line: Out of all the corners, Smith's stock is skyrocketing due to the combine. He ran better than expected; that combined with his height could intrigue some GM's to pull the trigger. He'll probably line up at safety in the NFL, and bet on him getting off the board in the early-to-mid 2nd.

Projected round: Early-to-mid 2nd round

Cons: Was ejected from the 2006 Clemson game for throwing a punch (no other character concerns)....must bulk up....does not disrupt receivers at the LOS....sometimes will drop catchable balls.

Bottom line: Smith does possesses some quality attributes, but I don't see his game translating well to the NFL. Call it a hunch or whatever you want to call it; his height combined with his cons scare me away. I've been proven wrong before, and I'm sure some GM will think he struck gold. Let's just hope it's not the Bears.

Pros: No durability or character concerns....can change directions easily....aggressive player who will jam receivers at the LOS....possesses elite jumping ability....sheds blocks with ease.

Cons: Struggles in man coverage at times; leaves too much separation when receivers break....seems to be a jack-of-all-trades player....must bulk up.

Bottom line: The 5'10" Butler showed he can compete with taller receivers for balls with his 43" vertical at the combine. He is above-average in many aspects, but needs some fine tuning to be an elite NFL player.

Projected round: Mid-to-late 2nd round

I did not see Francies play this year, but did he ever impress at the combine. He's 6'0", 185 lbs. and ran a 4.59 40 with 24 reps on the bench. Not only that, but Francies is projected to be a strict Cover-2 player. I would not be surprised at all if Jerry drafts Francies.