The 46 is a defense that stands alone, it is a base system that has roots only in the old ways (leather helmets and no forward passes). It was developed by Buddy Ryan for use by the Chicago Bears; it is named after the great Doug Plank. It is the only defense that is named after a player not the actual lineup. 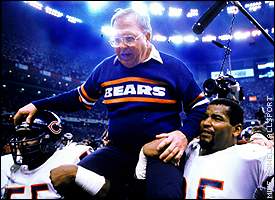 The system is a 4-3 essentially but it employs a NT and three Ends. The Nose and two ends clog the middle of the field lining up nose on center and ends on guards. It uses the last end as a Rush end, lining up on the weak side about three yards off the tackle, his primary purpose is to rush the QB.

The linebackers in this system consist of a Middle backer and two Strong side backers.

The strong side backers line up side to side, two yards outside the tackle and are rushers and run stoppers. The middle is a step up and clobber you type of player ala Singletary and Ray Lewis. They are required to scrape and attack the line of scrimmage.

By far the most difficult part of the defense is the secondary. It consists of two corners and two safeties, although the strong safety is in the box and lined up roughly with the middle linebackers basically making him a fourth linebacker. The corners are left on islands and must run man to man constantly. They utilize a bump and run technique and must stay with their assignments at all times. The strong safety is a fourth linebacker; he is crafty and quick with punishing hitting abilities. The free is a ranger and is required to cover the entire backfield and save the corners if necessary. He is the last line of defense. I know I’ve said that before but I can’t stress it enough in this situation.

The most incredible defense against the run, it was primarily designed to stop the run. There is a story of Eric Dickerson facing the 46 and pleading with the QB to audible out the run play.

This is the 46's downfall. It worked well for a time but then Bill Walsh showed up. The defense leaves the corners completely without safety help, so on short slants if the WR could beat the corner he was off to the races.

The 46 was, and still is the most feared defense ever, but like all defenses this one had a short coming, and its short coming was its death. The pressure forced by the 46 made it so the flats and the corners were open and with the coming of the short, quick west coast offenses, the 46 died. Practitioners couldn’t adapt the defense to the demands of the time and it fell out of use except in specialty situations.

Will the Bears ever use the 46 again? I can safely say probably not. They have the personnel to use it but with the other three teams in the division and most of the NFL using some form of the west coast it would be exploited very quickly.