Share All sharing options for: Next Great RB Tandem... Forte-Jones?

It has become a very popular concept in the NFL the last few years, and the Chicago Bears may be the next team to join the club: 2 great running backs. 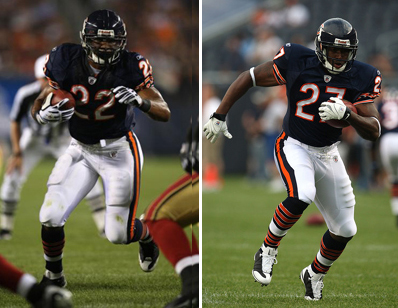 This is probably the best move Jerry Angelo has made since the end of the 2008 season:

An unrestricted free agent, he nearly signed with the Bills during a visit to Buffalo late last week. But Jones always wanted to return to Chicago—and he opted to do so after the Bears matched two offers he received in Buffalo and assured him that his role would expand on offense

And, we will need KJ to share the load, just to keep Forte from breaking down:

In 2009, the Bears intend to have Jones share more of the workload with Matt Forte, who set team rookie records in 2008 with 1,238 yards rushing, 63 receptions and 1,715 total yards from scrimmage.

"They didn’t [guarantee] a certain amount of carries or anything like that, but they did assure me that my role would be bigger on offense," Jones said. "I will play an important role on offense.

"I was talking to [general manager] Jerry Angelo and he said it was like kicking tires and checking a car but never really getting to test drive it. That was the analogy he used. So now this year we’re definitely going to get that done. I’m definitely going to play a lot more."

"It’s going to be good to be back in the room with him, and we’re going to do it together this year."

I'm not completely sold on the Forte/Jones tandem just yet, especially with the question marks surrounding our OLine. But, if we can address that properly in the draft, and Jones is truly healthy again, we just might have a nice surprise in store for the league next year.