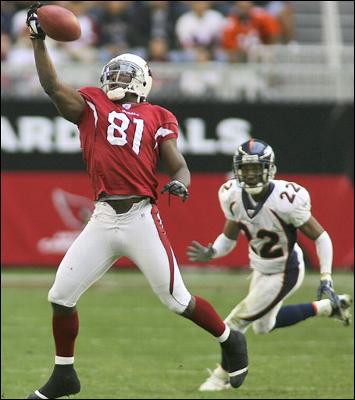 According to this article, the Arizona Cardinals are back to shopping WR Anquan Boldin.  With the Chicago Bears being docile during free agency thus far, we have the cap space to make this happen.

With teammate Larry Fitzgerald at $10 million per year, Boldin is believed to want at least $9 million annually

Boldin is definately a 100 catch, 1,000 yard WR... and when you look at our current roster of WRs, no one comes close to that level of talent:

In 2008, Boldin had 87 receptions and 11 TDs in 12 games.  Devin Hester, Rashied Davis, Marty Booker and Brandon Lloyd had a total of 9 TDs.  Matt  Forte had 4 TDs receiving and Olsen led the team with 5.

With Forte/ Jones in the back field, a good pick up on the OLine in the draft, and the addition of Rod Marinelli to oil up our defense, this could be a move that would solidify our success in 2009.