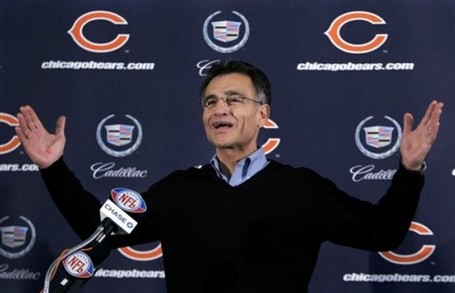 Are you talking to me?

With the draft quickly coming up on us, many of you are fast asleep at night with dreams of Heyward-Bey or Jeremy Maclin tip toeing down the sidelines in your head. Some of you have got into full on "Where's the Beef?" mode and are expecting Oher or Beatty are waiting for us. And maybe some of the more optimistic of you think that by some chance Andre Smith or Michael Crabtree off of their recent issues will still be sitting there for us at 18. Maybe though we should be focusing on what is the more likely situation. Trading back.

Angelo is a draft guy. That is his reputation and how he made a name for himself, so don't expect that to change. I have no doubt that Angelo and the Bears have never been unprepared or outworked when it came to scouting for the draft. Maybe their evaluating abilities are up for question, but that is a different post. That fact remains that Angelo has pinpointed a guy he can get farther back then where we are and it now looking to leverage that into more picks.

This post appeared on the official site listing out Angelo's trade history at the draft.

Since 2001 Angleo has been the man down in Chicago.  He has made 22 trades involving draft picks.  Players were apart of 13 of those trades.  That leaves 9 trades.  Eight of those involved moving down.

1) In 2002, the Bears sent second- and fourth-round picks to the Cowboys for selections in the third (cornerback Roosevelt Williams), fourth (defensive end Alex Brown) and fifth (safety Bobby Gray) rounds

2) In 2003, the Bears traded the fourth overall choice to the Jets for the 13th and 22nd (quarterback Rex Grossman) picks and a fourth-rounder (defensive tackle Ian Scott)

4) In 2004, the Bears sent a fourth-round pick to the 49ers for selections in the fourth (linebacker Leon Joe) and fifth (defensive end Claude Harriott) rounds

5) In 2006, the Bears traded their first-round choice (26th overall) to the Bills for picks in the second (nickel back Danieal Manning) and third (defensive tackle Dusty Dvoracek) rounds

6) In 2007, they traded their second-round selection to the Chargers for choices in the second (defensive end Dan Bazuin), third (running back Garrett Wolfe) and fifth (safety Kevin Payne) rounds

7) In 2008, they dealt their fourth-round pick to the Dolphins for selections in the fourth and seventh (defensive end Ervin Baldwin) rounds

8) They sent the fourth-round choice they acquired from the Dolphins and a sixth-round pick to the Buccaneers for selections in the fourth (safety Craig Steltz) and fifth (tight end Kellen Davis) rounds.

The one time he traded up was to get receiver Justin Gage, which in hind site might have been a good idea, just not for us.

Give me your opinions on this?  Do you think trading down is the best option in most cases?  Looking at who he traded down to get and who he picked up with the the extra picks, has it served the Bears well?