Share All sharing options for: Is Jerry Angelo Right? 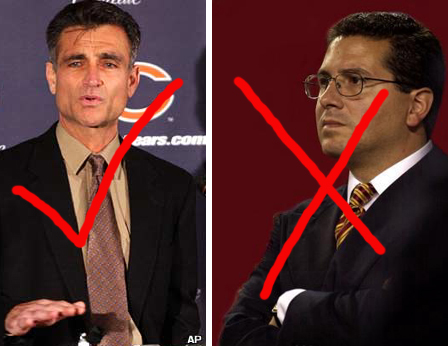 As fans it is our perogative and almost duty to call out management and coaches, because nobody else will.   To that though, we have to all accept that we've never had to put our names on the line and give 100 million to one guy and hope he is the savior of the team.

I thought this would be a good time to go through some of the popular talking points of this topic.  I am sure I will miss a few and maybe their are more examples that emphasize a point and some that negate others.  My intention is not to pick a side, just throw out the possibility that maybe we are viewing the team through homer colored glasses and not givinng credit where credit is due.

The basis for this post came from this article.

1) The Bears Are Cheap

We've dealt with this one a few times (here and here).  I feel safe in saying that the Bears aren't cheap.  It is just a matter of where they choose to allocate their funds.  In prior years the majority is used to keep players already on the team.

"The money is going to be spent," Angelo said. "We aren't saving anything for a rainy day. But we want to spend wisely, not foolishly."

That leads us to our next point.

2) The Bears Refuse To Be Players In Free Agency

This topic is a bit misleading.  I think it is often easy to confuse the off season with Free Agency.  The most ink I've spilled this year has been on  Anquan Boldin and as of late Jay Cutler.  Neither are free agents, so they cannot be used in that arguement.  Neither was Matt Cassel a free agent.

The best example to use here is TJ Houshmandzadeh.  Many lambasted the Bears for not going after this guy.  Some argued Angelo should be fired for not even looking at this guy.  Truth be told, are we sure he didn't.  The Bears didn't re-sign Bernard Berrian last year, becuase the price he commanded the Bears deemed to steep.  We let him go and used that money to sign Lance Briggs.  I'd say that worked out for us.  Briggs was possibly the only Bears you can say had a stellar year.  So does TJ fit the same category?  Seattle gave TJ what equates to 8 million a year.  Is a guy who until recently worked with one of the best QBs in the league, never been a true #1 and is now 32 worth that much?  Would he have improved our receiving corp and thus our offense?  Absolutley. But would he have been the lynch pin of a Super Bowl run or instead could he have been the biggest factor that hampered us from making needed moves in the future?  The Bears might have had him on their radar, but once they saw the market price, decided not to pursue further.

3) The Market Is Bad This Year

Angelo called this class of free agents "the worst I can remember."

It is a fair arguement.  The number one receiver available this year had questions.  After that we started talking about guys like Plaxico Burress and TO who bring so much baggage their contract should include a sky cap.  Once we looked past them we took a big dip to guys like Devery Henderson and Bryant Johnson.  Again, not that they wouldn't have improved us, but would they have been the difference?

Other teams that took a similar approach to free agency were the Cardinals, Chargers, Chiefs, Colts, Falcons, Packers, Panthers, Steelers, Vikings and 49ers.

You can look at this statement in a number of ways.  Firstly, teams like Pittsburgh, Colts and Chargers already have some of the most talent laden rosters in league.  Pitt and Indy are two of the most successful, did they need to make a spalsh?  San Diego is loaded and barely got in, do they need to go out and load up on more high priced talent?  The Cardnials have so much internal strife and so many of their own guys they have to deal with, staying out of the market might have been the best thing they could have done.  The Panthers had two of the most coveted players who could have hit the market in Jordan Gross and Julius Peppers.  They kept Gross and are still looking like they are the best option for Peppers.  Getting those two in uniforms is not standing still and is definitley not a lack of spending.  The Chiefs may not have made a FA splash, but they did land Cassel through a trade.  Solidifying your QB spot can never be considered not spending or not making an impact.

They easy answer is to look at the Washington Redskins.  They have thrown money at any available player they can find.  They care not about age, off field issues, character issues or miscellaneous baggage.  Skins owner Danieal  Snyder purchased the team in 1999.  Since then the Redskins combined win-loss record is 76 and 84.  The Bears win-loss record in that time is 80 and 80.  In that time the Skins have been to the playoffs twice, the Bears have been three times including one Super Bowl.  The Bears have 2 13-3 seasons and one 11 win season.  The Skins have never gone over 10 wins.  So clearly signing the best available players to the most money isn't the key to success.

5) Is Angelo At Fault For the Off Season As a  Whole?

This is the crux of this arguement.  As stated above the two most endorsed players on this site that Bears fans have argued for are Jay Cutler and Anquan Boldin.

Angelo in his post season remarks said the QB spot is the most important position and needs to be stablized.  He backed those words up by signing a guy none of us knew.  Meanwhile, Jay Cutler wants out of Denver in the worst way and from all accounts wants to play in Chicago and despite the fact that Cutler would be the best QB the Bears have ever had on board in the last 25 or 25+ years, the Bears don't appear interested.  Now maybe the reports out of Denver are correct and they aren't listening to trade talks.  That however would be an indictment of Denver.  As a GM it is your job to listen to all trade talk.  You don't have to act, but at least listen.  I still refuse to believe that if somebody came through with a quality off and allow them to finally wash their hands of this situation that they would not listen.

In those same remarks, Angelo also said that receivers are interchangeable and not all that important.  Maybe so, but that only holds true if your QB is good enough to get the ball to any scrub you throw out there.  Is he suggesting that if Orton had had a reliable and above average receiver last season his numbers would have been the same?  I hardly think so.  The Bears are seriously considering a wide receiver this year.  If you are contemplating taking a reciever at #1, aren't you contradicting the previous statement?  If reciever isn't that important, you don't waste a #1 on them.  To that point if you are going to bring in a receiver from the draft you are taking a shot in the dark that he pans out.  Meanwhile you have Anquan Boldin, a guy who also wants off of his current team.  Boldin is a proven and established receiver.  Some would argue that he has never been a true #1 and benefitted from Fitzgerald.  Maybe he has, but he still towers above anybody we currently carry.  Are you sure enough about Heyward-Bey or Nicks that you can say without a doubt that they are going to be better than Boldin?  I'm not.

So there you have it.  At least as far as what I had floating in my head.  Now let me have it.  Again, I'm not specifically taking a side, though it is obvious I am a fan of the idea of going after either Boldin or Cutler or both.