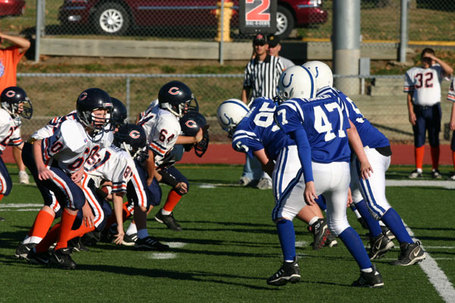 Omiyale was initially brought in to provide depth and/or compete for the guard position, but with John St. Clair signing in Cleveland, and John Tait being placed on the injured/retired list, a bigger need presented itself.

So much for Frank Omiyale lining up at left guard. The Bears new signee lined up at right tackle with the first unit during the second day of mini-camp Wednesday.

Omiyale was the second string left guard on Day 1. With John St. Clair gone to Cleveland, it wasn't a surprised to see Omiyale moved. But is the move permanent? We will see.

The upcoming draft will still provide opportunity to at least partially shore up the offensive line, but with Olin Kreutz adding another year to his long career, Roberto Garza not really making an impact, and Chris Williams still unproven, our potentially great duo of RBs might need to step it up another notch this upcoming season.