Share All sharing options for: NightLink II: Only One Team Shows for Nate Davis's Pro Day 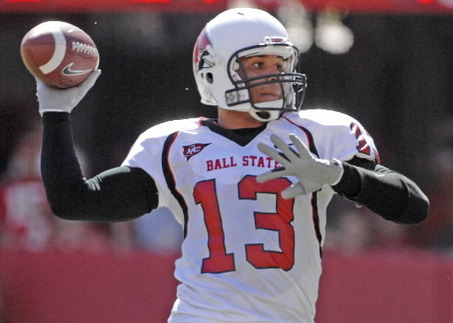 I'm not sure what is more interesting... the fact that the Colts were the only team that showed up for Nate Davis' pro day, or the fact that Davis holds the football the way he does (pictured above).   Regardless...

From The Star Press:

The Indianapolis Colts were the only NFL team to send a scout to the workout, which featured Davis throwing passes to former teammates Darius Hill, Louis Johnson and former Indiana wide receiver Brandon Walker-Roby.

"I was very disappointed (only one team showed up), but you only need one team to fall in love with you," Davis said.

"He threw the ball like he always does -- outstanding," said DeBerg, who worked with Davis for about five weeks starting in January at Saddlebrook Resort in Tampa Bay, Fla. "He made all the throws -- short, deep, intermediate. I was very happy, and impressed as always. It's fun to work with a quarterback who has as much talent as Nate does."

What to make of this... I have no idea.  I know that Davis had a shaky combine... and that at least one NFL scout thought he needed a strong showing in his pro day to preserve his ranking among QB prospects.  It sounds like he did just that, but with no one interested in showing up, does that mean that Davis may fall into the 3rd round or beyond?  I know a lot of you are high on Nate Davis... how do you interpret this lack of interest?