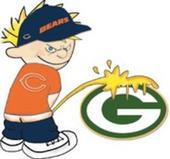 The NFL has announced the nationally televised opening weekend games... and the Chicago Bears will travel to Green Bay on September 13th to play under the lights on Sunday Night Football on NBC.

We will have an opportunity to set the tone early... and to show the nation what to expect from our 2009 Chicago Bears.