Greetings To All New Users!

Share All sharing options for: Greetings To All New Users! 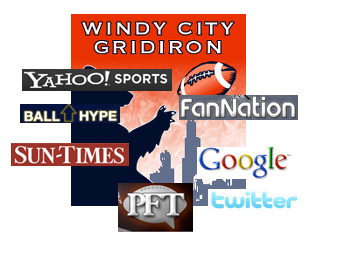 It has been a little over a month since our new arrangement with Yahoo! Sports has been going.  In that time, we have gained 5-10 new users per day; we have over 100 new users since that announcment.  I'm sure not all of those users are from the Yahoo! campaign, so I wanted to extend a welcome to all new users.

Since the last welcome the site has been through a lot of changes organization-wise and I thought I'd take a moment to give you a brief history of the blog and introduce you to the team.

I had been running my own fan site called Bearsblog (no longer exists) for I'd say 8 months.  Nothing overly special....I just wanted to a better avenue to rant about the Bears than a message board.

It turns out that one of my few readers was one of the guys who runs SBN's Chicago White Sox blog.  When SB Nation decided to expand into NFL blogs, they asked their current writers if they knew of anybody and my name was offered up.  They made contact with me and shortly thereafter Windy City Gridiron became SB Nation's very first NFL blog.

It was rough going at first.  I had no real experience with blogging and I had no experience with growing an audience or getting the site out to a broader audience. Soon SBN added a few more sites and then it just took off and we are a full force now.

The site has been running since early 2005.

The site has been through roughly 8 cobloggers before we settled into the current group.  Here is a run down and a little bit about everybody's duties and what to expect.

As I have said this has been my blog since early 2005 and I don't see that changing anytime soon.  I am the lead blogger, though I have been handing out a great deal of that duty to others now.

Though I do maintain a full time job, I'm pretty much always online, so if you have any questions, suggestions or just want to do some general Bears chatting send me an email.

Decisions on the site from the direction of the site down to individual user management are ultimately made by me, so if you have any complaints, questions about any process or issue please don't hesitate to contact me.

I had been through a few other co-blogger's before ChiFan came on board.  He is, however, the first who had any interest in putting the type of time and energy into the site that I did.  We talk daily on the current direction the site is going, where we want it to be and down to the small issues of user management.

He also helps handle the day-to-day scheduling of the site.

ChiFan is also the lead editor of the site.  A distinction that any of you who have been with me for a long time know can be a full time job with my constant mangling of the English language. (EDIT: Left this one for comedic effect - ChiFan13)

GB came to work here unexpectedly.  I had been doing a decent amount of advertising looking for new writers.  Through an ad posted on another site, we picked up about 4 new writers.  GB wasn't one of them.  He came on shortly after and now that the dust has cleared he is only one who remains.

Though ChiFan and I do have the ability and rights to delete comments or send our warnings and we will, GB has taken on the role of lead moderator.  With my other blog-related duties, unfortunately I am sometimes unable to get into every comment section as they are updated.  That leaves the site open to things getting out of hand without me knowing about it.  That is where GB comes into play.

Unfortunately, with that role comes the down side, which is that at times, some of you are not going to like him.  Let me make this clear: he is acting on the guidlelines that I have set forth.  There will be times when a comment is removed that might be borderline.  The most likely reason is the intent of the comment might not have been clear and we took it as something else.  In these cases, we will always err on the side of caution.  All deleted comments are reviewed.  If after we decide that the comment did not need to be deleted, I will get in contact with you and explain what happened.  If you have any questions on why something is deleted please contact me.

While this role can be a thankless job, I assure you the site is better off with him filling it.  The site needs somebody to keep things from getting out of control as they sometimes tend to do.

Scespy12 was an addition brought about by the need for somebody who has a more X's and O's understanding than anything the rest of us could bring.  He has a very detailed background on the defensive side.  During the offseason he is doing a lot of general breakdowns of how certain schemes work. Once the season starts you will be seeing more from him.  He will be handling the film breakdown portions of our post game coverage.  We look forward to seeing those much-needed additions to the site.

These are the guidelines that the site uses to govern itself. Understand that these can be changed at anytime and how they are interpreted is at the discretion of site employees.  If you have any questions on them, again feel free to email me.

In the very near future you will be seeing some posts on how to properly use many of the site's features.  Some will also give you hints on how to get your posts to appear on the front page.

We here at Windy City Gridiron look forward to continuing to serve up the very best in Chicago Bears news, opinon and discussion and we look forward to hearing from you.