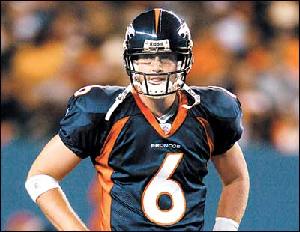 Around these parts Jerry Angelo has become our favorite punching bag.  But in light of this recent article maybe he isn't as worthless as we thought.  According to it:

At some point in the process, the Detroit Lions and Chicago Bears also expressed interest in Cutler. The depth of that interest is unknown, but both teams are still thought to be in play if Cutler once again becomes available.

I understand this doesn't mean we were ever close to making a move for Cutler.  It could have been as simple as Angelo calling them, asking, them saying no and hang up the phone and move on.  We also don't know how recently he showed interest, but this does mean something.  If only that Angelo isn't really sitting behind his desk, watching First and Ten reruns and flicking boogers at a picture of Bill Polian screaming "You got nothing on me!" as many of us think he is.

Does this renew your faith in Jerry Angelo at least in the smallest possible way?