Hmmm….. the spread. I hate the spread offense. But for the sake of all things fair here goes:

The spread is an offense that takes its roots in the Triple Option (if you need me to do that too, just ask). It relies on using skills players "spread out" across the field to, obviously, "spread out" the defense. This allows the offense to open running and passing lanes in the open parts of the field. 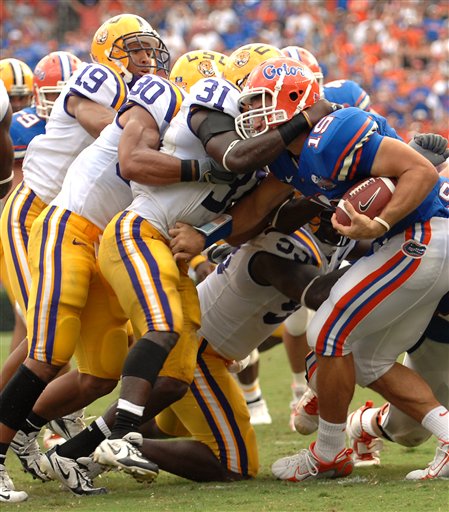 After the obligatory HAHAHAHA LSU! to Geaux: Lets look inside......

Quick, nimble, agile, whatever you want to call them, the offensive line is designed not for the power running, but in a two point stance on the tackles and a leaned back three for the guards. They will always look to be passing the ball on all downs, on any part of the field.

If the team uses them, which is a maybe, they can be lined up on the line, close to the line or “spread out”. They are not the blocking tight ends that dominated the category in the past but they are almost strictly receivers. Not quite as fast but as sure handed and usually stronger.

Typically the focal point of the spread offense, they are the “spread” part.

In the passing spread (TT, etc.) there are 4-5 on the field at once and are used to confuse the defense and create mismatches with slower DBs and safeties.

Used as a receiver in the passing spread or as an extra blocker, the running back is a versatile player that must be quick and have outstanding hands. In the running spread the back must have great vision and outstanding agility. The running spread is usually a one-cut or a zone blocking scheme, with the receivers playing decoy or acting as motion blockers.

The spread had revolutionized the quarterback position. Before the quarterback was a non- threat in the running game but with the emergence of M.V., V.Y., Pat White and the only man who beat up Chuck Norris, Tim Tebow; the QB position is now one that must be countered by the defense. The emphasis on mobility has caused many to doubt the spread QB's ability to be a professional QB.

The spread is purely a college phenomea and will stay in the college ranks. The issue is that it makes it virtually impossible to evaluate talent for the professional game.