Would the Bears Ever Consider Michael Vick?

Share All sharing options for: Would the Bears Ever Consider Michael Vick? 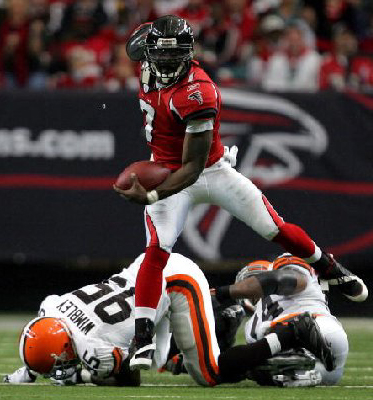 I am going to have to implore you to read this article thouroughly before jumping into a full-on attack about this idea.  Michael Vick is scheduled to be a free man in July of this year.  His future in football is of course a huge question mark... Arthur Blank, the owner of the Atlanta Falcons, said back in October of 2008 that he would like to see Vick play in the NFL again, just not with the Falcs.

There has also been interest in Vick from the new UFL, with commissioner Michael Huyghue stating several months ago that there was a 98% chance Vick would play in his league in 2009.  Of course, Vick would undoubtedly prefer a return to the NFL.

NFL commish Roger Goodell stated on Wednesday that he would consider reinstating Vick, but that he needed first to gather all of the information that he could:

I think it's clear he's paid a price, but to a large extent he's going to have to demonstrate to the larger community -- not just to the NFL community and to me -- that he has remorse for what he did and that he recognizes mistakes that he made.

All of the legal mess that Vick still has to untangle will certainly be a deciding factor in his possible return to the league... but for a moment, let's assume that he gets it all worked out.

Everyone makes mistakes, but he has to show that genuine remorse in his ability to be a positive influence to correct the things that he did wrong publicly," he added, according to the report.

Let's also assume that he is able to persuade Goodell into reinstating him.  After all, regardless of what you personally think about his crimes, he is following the guidelines set before him by the judicial system, and seems serious about getting his life back together.

The purpose of this article is not to get into a moral debate about his previous criminal history... and not to get into a debate about whether the legal system handled it correctly.  The purpose is to consider this:  If Michael Vick were deemed by the courts and by the NFL to have paid his debt, and were willing to allow him to continue his career in the NFL, would the Chicago Bears consider bringing him in?

Vick was one of the most talented athletes to ever put on a uniform, and it could certainly be argued that the system in Atlanta wasn't suited for him.  If he has been keeping his body in shape, there would have to be some interest from teams about what he could contribute on the NFL level.

How would you feel about the Bears giving him a shot?