They say that hind-sight is always 20/20... and it's always fun to second-guess decisions made by the folks in charge. A ton of time has been spent pouring over the choices our great football team has made... sometimes, we hit the nail on the head. Other times, we cry out "What were they thinking?!" 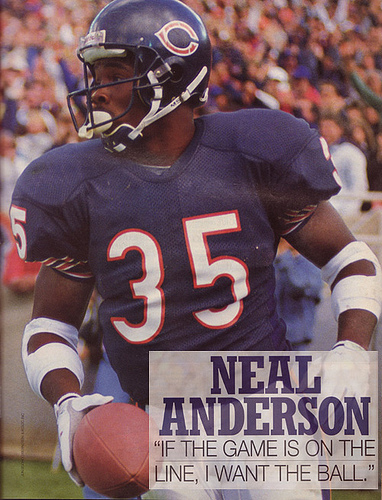 I don't think too many people would argue that pick.  Neal was named to 4 Pro Bowls, and did pretty well considering the shoes he was called on to fill after Walter Payton retired.

The only other Pro Bowl running backs that were drafted in 1986 were Dalton Hilliard, selected by the Saints in the 2nd round, and Vai Sikahema, selected in the 10th round by the St. Louis Cardinals (although he was mainly successful as a KR).

In the 2nd round, the Bears went with Vestee Jackson, CB from Washington.  Jackson started in 16 games in each of his 5 years with the Bears.  The only Pro Bowl defensive back on the board when the Bears made this pick was David Fulcher, who was selected in the 3rd round by the Bengals.

Overall, I would say that this was a very successful draft.  But, what if we had picked up any of the Pro Bowlers that we passed on?  Would we have seen a better foundation for our transition into the early 90's?