Darren Sharper On His Way To Chicago

Share All sharing options for: Darren Sharper On His Way To Chicago 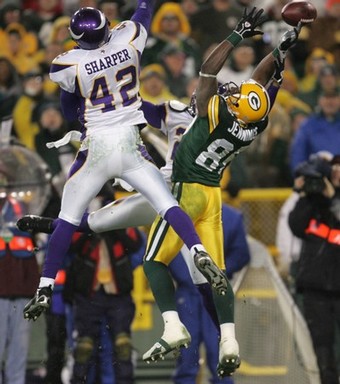 After a meeting in which both parties say they remain "very interested" S Darren Sharper has left New Orleans without a contract in place.  One source says that  Sharper is on his way to Chicago.

Firstly, we have to get past the "if they were going to give a contract to an old and sometimes broke down safety, why not just resign Brown?"  That ship has sailed.  This is a very Jerry Angelo move.  Bring in the older experienced guy for 2-3 years.

Is it just me or does this move seem like it was going to happen all along?  It is almost like Sharper has already decided that he wants to play in Chicago, so he visits a few other teams to try to leverage the best possible deal.  Now he goes to Halas Hall and all the Bears have to do is not low ball him.  I mean, who else are the Bears going to spend all their free agent money on?

Now the only thing we have to worry about is that he leaves us after 2 years, so he can sign with Detroit and finish his career Grand Slam of NFC North teams before he retires.