Share All sharing options for: NightLink: The QB-Deprived NFC North 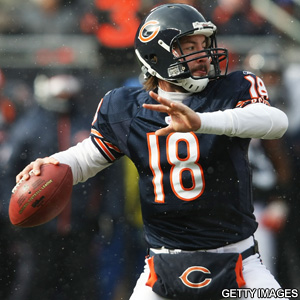 Considering it is the off-season, there is no reason why Brett Favre's name shouldn't show up somewhere in some paper every day of the week.  In this instance though, the article is focused on who will be the next QB to step up and take the reigns in the NFC North.

"I think you go in cycles like that," Chicago Bears coach Lovie Smith said at the NFL owners meetings last week. "We were kind of spoiled for a long time in Green Bay where you knew you had one guy there every year. Our position has rotated quite a bit, Detroit's has also. You look at Minnesota, same thing. It's a little bit of the changing of the guard."

"I still say the guy that does emerge out of the group, (his) success will say a lot to that team's success. We hope it's Kyle. We have a lot of faith it will be Kyle."

Rogers by far had the better numbers, but also made some critical mistakes in late-game situations.  Orton was solid before his injury, and showed some flair when under pressure.  As far as the QBs in Minnesota and Detroit, I don't think they have anyone on their rosters yet that will step up and take control of the North.

"As a quarterback you have moments when it's on you," Smith said. "We're a running team and we play special teams, but our quarterback has to make plays. We've seen Kyle in some tough situations. We just trust him. That's where you try to get to. You have faith in a leader and we do."

So, regardless of whether the reports of the Bears contacting the Broncos to inquire about Jay Cutler are true or not, Lovie Smith is sticking to his guns:  faith and trust in Kyle Orton.

Do you see Kyle Orton as capable of becoming the next Favre in the NFC North?