This Q & A  takes a shot at why the Bears shouldn't even consider Jason Taylor.

If you are one of those who thinks the Bears should draft Mark Sanchez, the same article lists the teams in front who may be in need.

I'm curious, what is John St. Clair waiting on?  He has a contract offer from us and unless it has gone under the radar I haven't seen any visits scheduled for him.  The top linemen are off the board, now is the time they would come calling if they were interested.

An arrest has been made in the murder of Shaun Gayle's ex-girlfirend.

Paul Edinger wants back into the NFL; The Den wishes him the best of luck.

Sorry, I found this amusing: 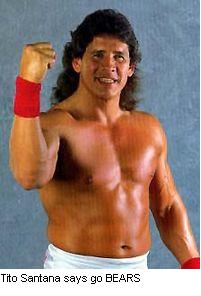 From a radio survey:  60% of men prefer to see woman in their team's favorite football jersey than sexy lingerie.

It is odd.  Every other impersonation that Frank Caliendo does ends up looking like Fat Al Pacino or Fat Seinfeld, except John Madden.