This article blames a weakened free agency pool and the economy as to why more teams are not paying out the big bucks.  It's ok, we know Jerry is just cheap and stubborn.

Would the Bears bite if Rey Maualuga falls?

On second thought, Darren Sharper isn't planning on visiting Halas Hall, but that won't stop him from signing with the Bears.

Scroll down on this one a bit and see another possible target for the Bears at safety. 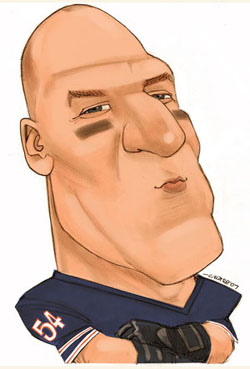 I just want to say that as much as I dislike the way Free Agency has been going for the Bears, I really would like to know what is going on over in AZ.  They barely seem interested in signing the best QB they have ever had and one who just took them to the Super Bowl for the first time ever.  Their QB and #1 receiver have both made statements saying they would be open to restructuring their contract situation if it meant a better deal for Anquan Boldin.  Not to mention if they did trade him they could likely snag a #1 or a #2 and a player to fill a hole.  Edgerin James, their backup, wants out in the worst way and they aren't budging on that.  They did just go to the Super Bowl, right?