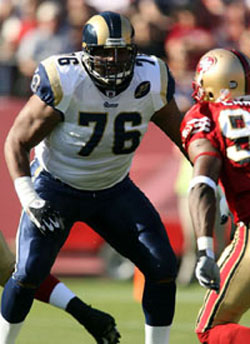 A Bears Den will be coming later, but I wanted to get this story up and my apologies if somebody dropped this link in one of the comment sections that was going crazy last night.

I thought the Bears had backed out of the Oralndo Pace sweepstakes considering he is insistant on staying at left tackle.  The Bears had seemed comfortable with the idea of Chris Williams getting that spot.

According to this article that isn't the case:

The Bears have made signing Orlando Pace a priority and intend to leave him at left tackle if he joins the team, according to an NFL source.

Pace, who played 12 seasons with the St. Louis Rams before becoming a salary-cap casualty last month, visited Halas Hall on Monday. Agent Kennard McGuire said Pace "had a very good and productive" visit. McGuire declined to discuss specifics in relation to a contract offer. Pace reportedly has an offer from Baltimore.