Four Down Territory with Brad Biggs: Cutler and a $100,000 bonus and Torry Holt to the Bears?

Adewale Ogunleye and Israel Idonije performed a great charitable act. If there's one story you read in the whole Den, read this one.

MouthPiece Sports suggests the Bears should look at Amani Toomer.

Eleven reasons why Cutler had to leave Denver.

Lemme guess....you're at work and you're bored as hell. Do you need a time waster? Take a quiz on the Bears QB's over the past 20 years!

Do you think Alex Brown has his priorities a bit off here? 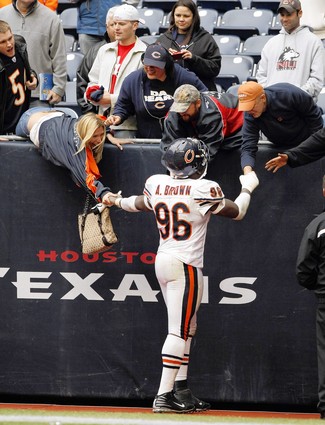 The Chicago woman who is alleged to have killed the pregnant girlfriend of ex-Bear Shaun Gayle has pleaded not guilty.

The Bills' Marshawn Lynch was suspended for three games.

TO is now showing up at voluntary workouts for the Bills. In a related story, no one cares.

The newest Bengal to be inducted in the "Lawfully Unabiding Hall of Fame": Leon Hall, DUI.