NightLink: Cardinals Will Listen to Offers for Boldin

Share All sharing options for: NightLink: Cardinals Will Listen to Offers for Boldin

The last few weeks have brought a hush to the Anquan Boldin trade-rumors, but it appears that head coach Ken Whisenhunt has opened the doors to trade talks.  Could Boldin be traded before the draft? 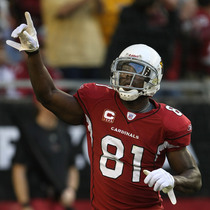 It would be foolish from out (sic) standpoint not to listen to those opportunities and see what actually exists.

Boldin is considered a No. 1 wide receiver so it could cost a No. 1 and No. 3 draft choice to acquire him.

The Bears have addressed one of their biggest needs in franchise history by adding Jay Cutler to the roster, but still lack a franchise receiver to compliment him.  I don't think we have the ammo to go after Boldin, but Jerry Angelo has made magic happen recently.

Could he still have a rabbit up his sleeve?