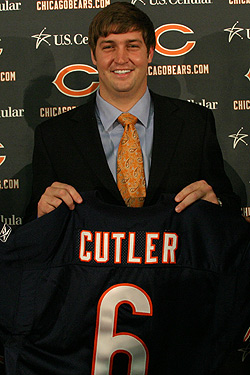 This week is all about the draft. I'll be running through the draft schedule, a brief opinion piece on who the Bears should draft, a vote on draft weekend posting, and the Cretin of the Week.

BTW - For all who were expecting the drafting breakdowns of various GM's, I'm sorry. I have one final week of papers/projects to finish and then I will (more or less) be done with school for the semester. The breakdowns will be posted starting on May 4th.

If you have NFL Network, here's the schedule for the draft weekend festivities. Otherwise, the draft times are below:

After the draft has concluded on both days, I will be breaking down each Bears pick. Windy City Gridiron will be keeping up with all the rumors, breaking news, trades, and anything else that happens on draft weekend, so make sure to stop by and stay a while!

We all know the argument of need vs. best available come draft day. We need a FS, WR, and OL. We could use players at other positions (DE, DT, FB off the top of my head).

I understand the argument, and I also realize that picking the best available person is usually smart policy. But am I the only one that thinks that we need a WR really badly? We have other needs, to be sure. Still, I'm worried about our WR corps. I trust that Jerry & Co. will draft a WR; I'm just hoping it's earlier in the draft rather than later.

This is all thinking out loud; I want your feedback on this so we can provide the best coverage of the NFL draft.

The tentative plan as of right now is:
- Draft Day threads would be up early on each day. On those threads, I will update the rumors, trades, who the Bears select, etc.

- After the draft has concluded on each day, I will have one post that is dedicated to the prospects selected on that day.

- Once Day Two has concluded, I will combine the Day One prospects with the Day Two write-up and have one master list.

This was my tentative plan for the draft weekend; however, I realize that might not be what you want. What would you like to see from us posts-wise on draft weekend?

Cretin of the Week

Sorry for the lack of a Cretin award last week; the post was long enough as it was.

This week's winner is Percy Harvin and the other 25 prospects that tested positive for banned substances at the NFL Combine. Hopefully we'll find out who the others are today or on Tuesday.

On other websites, I've seen a lot of comments from readers that essentially say, "Well, weed's not that big of a deal. Steroids are worse." That's really not the point. Part of it can tell you how prospects will make decisions. If you are dumb enough to smoke weed or use steroids before the biggest job interview of your life, you deserve to see your draft status drop. If using drugs or steroids is worth the potential of losing a million dollars, then go for it. Seems fairly stupid to me, but it's your life.

Last Week's Winner: All football fans who thought the Bears ended up with the short end of the stick in the Cutler trade